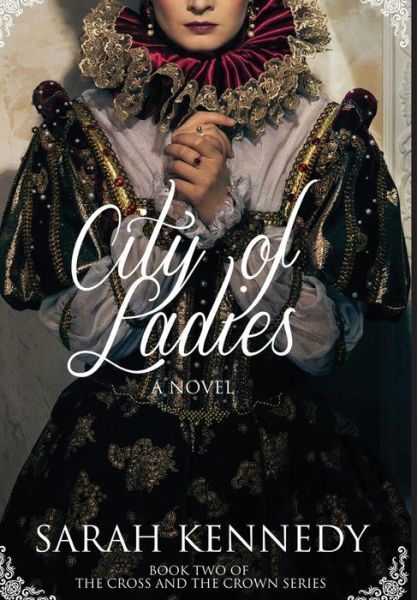 City of Ladies by Sarah Kennedy is the second novel in The Cross and The Crown series and it doesn’t disappoint and what a fantastic cover! Once again Sarah has outdone herself with a beautifully written novel that transports us back to Tudor England and and a story not to be forgotten!

City of Ladies finds Catherine, a former nun, married now to William with a son Robert and a newly born daughter Veronica. The convent where she grew up and the land it occupied once belonged to Catherine’s family but is now under the ownership of her husband. While Catherine is happily mistress of her own household, her friends and former nuns, were not so lucky. Henry VIII not only destroyed the only sanctuary they had when he took down their convent he also made sure they had nowhere else to go. Of course Catherine could not allow this to happen so she brought them into her own home. Her dream is to build her own City of Ladies and have the nuns serve the community and belong once again but as long as the people believe them to be witches she will never succeed. When the worst happens and the women of the house begin to disappear and turn up dead everyone is left wondering if they are safe… including Catherine.

William, wanting Catherine safe, puts her into the service of the young and Protestant Elizabeth Tudor. At first Catherine believes she will only be serving Elizabeth but soon enough she learns that she will also serve the Catholic Mary Tudor who has been shamed for her beliefs as the war over religious beliefs still goes on. As the murders continue to plague Overton House and others become ill Catherine struggles to find out who is behind the murders before it’s too late.

City of Ladies was a wonderful novel that I had such a hard time putting down. I adored Catherine in the first book The Altarpiece and I sitll do. She is such a strong, caring, and intelligent woman. Unfortunately it just that intelligence that has people thinking her a witch. In the time of Henry VIII a woman who was talented as a healer and intelligent could easily be thought to have evil dwelling within them and hanged and Catherine had to be very careful not to step on the wrong toes, namely Henry VIII. I am already anxiously looking forward to the third book in the series – The King’s Sisters, which is due out in 2015.

Well done Sarah – I loved it! For fans of historical fiction I highly recommend the whole series consisting so far of The Altarpiece and now City of Ladies!