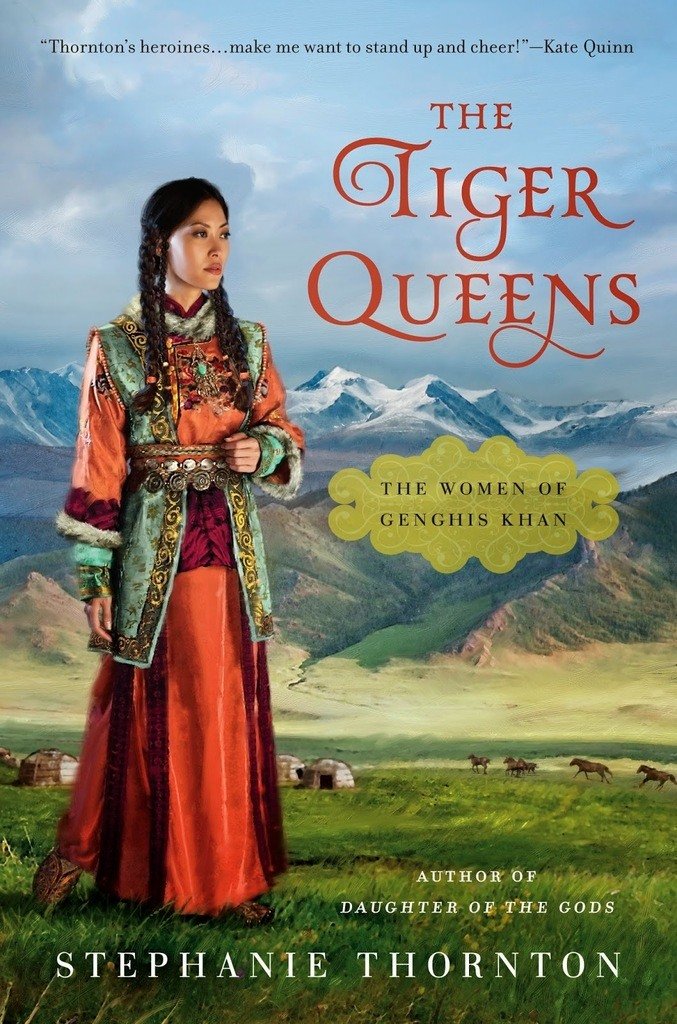 Stephanie Thornton is one of my favorite authors for historical fiction because when I sit down with one of her novels I am immersed in another time and place that is so brilliantly brought alive in my mind. I adore her writing and her newest The Tiger Queens is nothing short of amazing. Rich in historical detail and with the intricate weaving of the stories of the women of Genghis Khan this novel is fascinating. I simply couldn’t put it down and I’d be remiss in not mentioning the cover.  It is absolutely gorgeous!

I knew nothing about Mongol history before reading this novel. To learn about it through the women who stood behind Genghis Khan is genius. The novel shifts between four women – Borte, his first wife, Alaqai, his daughter, Fatima, a captured woman, and Sorkhokhtami, his mother. Each woman has a story to tell, each woman is strong, and all have a great instinct for survival despite the harshness of their environment. These women were honored by their husbands but god forbid they fall into the wrong hands as the men of this era didn’t hesitate to rape, murder or make slaves out of the women of rival clans. Thornton doesn’t hesitate to write their situations as bluntly and harshly as they would have happened. Many times as I was reading I couldn’t imagine ever living through what these women did and not only in the face of men who could be cruel but the environment itself. The hard work they faced each and every day, the many children they bore, the wars they faced – it just all seems so unreal to us now in modern times. Yet their spirits seemed to soar above it all and they were able to find happiness.

Of all the women I think Borte was my favorite. The story begins with her and she captured my heart right away. She becomes Genghis Khan’s first wife and they shared a special bond throughout. Borte is such a strong woman and more courageous than I could ever imagine being. Her daughter Alaqai was a favorite as well though. She was her father’s wild girl and had women been allowed to be leaders she would have made a far better one than any of her brothers. She too had the strength and resilience of spirit that her mother had. Fatima before being captured had been a noblewoman and she had a strong desire for vengeance against those who had destroyed her clan. And then there is Sorkhokhtani who seemed to be in the background of things and yet she never really was as she had the strength to hold all together in the harshest of times. I have the utmost respect for the women of this time. I loved reading about them but I would never want to have lived their lives.

For fans of historical fiction The Tiger Queens is not to be missed. It’s always great to read stories that are new and fresh in historical fiction and it’s a treat to learn of women and a time in history that isn’t widely known. I loved this book, so much so that it’ll be on my list of favorites for this year! Highly recommended!

Source: Digital review copy was received from the publisher for an honest review.  No compensation was received and all thoughts and opinions are that of the blog owner.