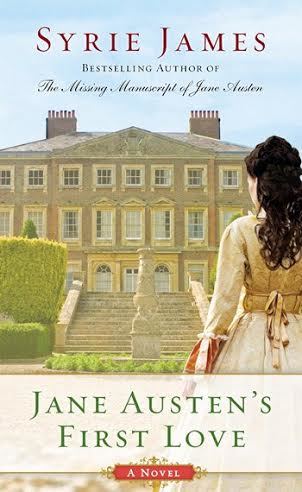 Jane Austen’s First Love by Syrie James is a delightfully charming re-imagining of a time in Jane Austen’s life and of what might have been.  Syrie James wrote this novel in such a way as to appear to be a memoir written by Jane Austen herself and it is truly a captivating tale.

The novel centers on one unforgettable summer in Jane Austen’s life when she was fifteen years old and how she remembers it.  Like any young girl Jane longs to fall in love but she’s quite sheltered at home and despairs of ever meeting anyone.  When the opportunity comes to travel to Kent to celebrate her brother’s engagement she is thrilled.

It is there that Jane meets Edward Taylor and finds herself swooning over him.  Not only is he handsome but he acknowledges her intelligence and they have wonderful conversations.  Jane is in love but … there is another girl who seems to be in love with Edward as well.  Yet Edward has shown Jane that he is interested in her.  Could it be?  Could Edward be as in love with Jane as she is in him?

Despite her love interest Jane finds herself needing more to do and can’t help but stick her nose in other people’s business and take up matchmaking.  She feels the need to rearrange the relationships that are forming and feels quite certain she knows who belongs with who.  To further her hopes in making these matches she puts on a play.  What transpires changes her thoughts on love – the love not only between the other couples but she and Edward as well.  Are they truly a good match or is Jane just swept away on the wings of first love?

Highly recommended for Austen fans or those new to Austen.  The extensive research that Syrie James put into this novel shines through on every page and she highlights her inspiration and the fact that this novel is based on true events and real characters in her superb author’s note.  Jane Austen’s First Love is truly an enjoyable novel and I absolutely adored it! 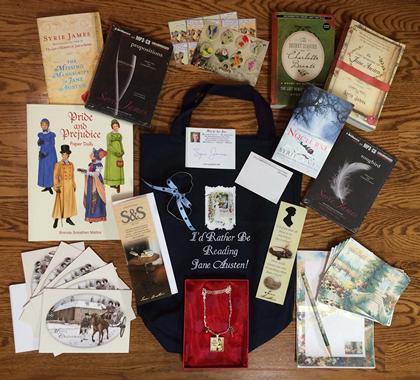 To celebrate the holidays and the release of Jane Austen’s First Love, Syrie is giving away five prize packages filled with an amazing selection of Jane Austen-inspired gifts and books!

To enter the giveaway contest, simply leave a comment on any of the blog stops on the Jane Austen’s First Love Holiday Blog Tour.

Increase your chances of winning by visiting multiple stops along the tour! Syrie’s unique guest posts will be featured on a variety of subjects, along with fun interviews, spotlights, excerpts, and reviews of the novel. Contest closes at 11:59pm PT, December 21, 2014. Five lucky winners will be drawn at random from all of the comments on the tour, and announced on Syrie’s website on December 22, 2014. The giveaway contest is open to everyone, including international residents. Good luck to all!

Remember leave a comment on any of the Jane Austen’s First Love Holiday Blog Tour stops including mine to be entered!