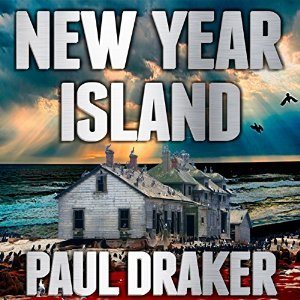 New Year Island by Paul Draker was an awesome audiobook for me! It is narrated by Teri Schnaubelt who I’ve never listened to before but she does a fantastic job with this suspense filled story! This audiobook is 23 hours long and I’ll tell you it flew by so quickly and I could barely stop listening for any reason. I’m sure the print book is just as good but nothing is better than audio for relating the suspense, fear, and horror that goes along with a well told story.  For this type of genre this was a five star listening experience for me.

I love stories about people having to survive – like on the television show Survivor. I love that kind of stuff so this book fit the bill perfectly for me especially since Survivor just ended. Ten strangers are contacted by a new reality show. The reason they were chosen is that they are survivors in one way or another in their lives. They are taken to a small island and left there – alone. They learn quickly that the island is inhabited by some strange and not very friendly sea creatures. They also learn that their every move is being recorded from hundreds of hidden cameras. Soon enough they are introduced to their host Julian via a monitor and find out that they are to compete in teams and sometimes alone in highly competitive and sometimes dangerous challenges. Needless to say as the days wear on and the contestants find themselves injured and without enough water or food they begin to get angry and combative. Instead of pulling together the situation brings out the very worst in their character and they find themselves even turning on each other. When one of them dies though the stakes become much higher and they begin to wonder if they will be allowed to leave the island alive at all…

Despite there being so many characters the author does a phenomenal job of letting the reader know just who they are individually. We learn over time why each of them is there and ultimately we learn who the real mastermind is but the edge of your seat thrill ride to get there is one that is sure to keep a reader or listener glued to the story. So often I would find myself talking out loud and saying ‘oh no don’t do that or don’t go there, or just plain oh boy’ that my poor dog was even a bit anxious. I definitely had my favorites in the book that I rooted for and while some of the scenes might have been a tad unbelievable I feel people need to suspend belief sometimes to be taken on a true thrill ride that gets their heart beating at top speed. Loved it!

Highly recommended for those who like survivor type stories, mysteries, psychological stories and most definitely suspense filled ones! I look forward to reading or I hope listening to more from Paul Draker.

Source: Review copy provided by Audible for an honest review.  No compensation was received.