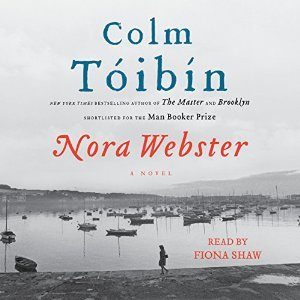 Nora Webster by Colm Toibin is an emotional and beautiful story and one of those novels to savor word by word and page by page. Toibin’s lyrical writing is beautiful and even more amazing to listen to as I did. The audio version of Nora Webster is narrated by Fiona Shaw who is such a pleasure to listen to. She takes on the voices and personalities of her characters and really draws the listener into the story. She does a fantastic job and I look forward to listening to her again.

Set in the 1960’s in a small town in Ireland this is the story of Nora Webster who is suddenly widowed at the age of 40. It is the story of her struggle with her grief, her children, her worries of how to support them, and most of all of how to move on with her life with her husband gone.

For Nora, Maurice was her everything. After supporting him through a long illness and losing him Nora is emotionally worn out. Her well meaning neighbors are driving her crazy and she just wants them all to go away already and stop with their never ending barrage of questions. Even worse though is she can’t seem to see past her own grief to see how much her children are suffering from the loss of their father. Slowly Nora begins to emerge from her grief and depression to begin living again and this story is her journey to get there.

Nora isn’t a character I connected with although that doesn’t take away from my enjoyment of the book. I found her to be selfish and much too concerned with herself. Yes she lost her husband but she had four children and that should have been her focus. Still I admired her for eventually pulling herself out of the depths of her depression to make a life for herself and her children.

This isn’t a fast paced story. It slowly unfolds as does the awakening of Nora’s true self. I’m not sure I would have enjoyed it as much in print as I did in audio. With the narrator’s smooth and flowing voice this emotional novel was a great listening experience for me.

Recommended for fans of literary fiction.

Source: Audiobook provided by the publisher for an honest review. No compensation was received.