Happy Monday everyone!  Releasing today is Sujata Massey’s newest novel The Kizuna Coast and I’m here to tell you a bit about it and the author.  I look forward to reading this myself as I read The Sleeping Dictionary by Sujata last year and absolutely loved it.  It was one of my favorite books last year.  The Kizuna Coast is part of the Rei Shimura Mysteries collection and while this is the eleventh book they can all be read on their own.  Be sure to pop by the end of the post as well because Sujata has been kind enough to offer up 3 copies of her newest book to be given away! 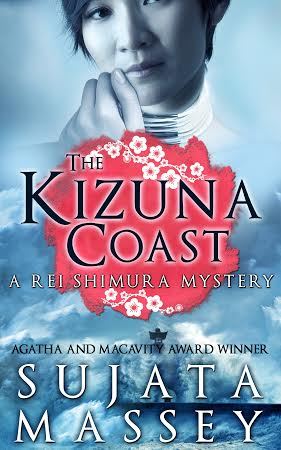 When a devastating earthquake rocks Japan’s northeast cost, a tsunami follows and Rei Shimura is swept into her most rugged adventure yet.

The mystery begins with an SOS from Rei’s friend, the antiques dealer Mr. Ishida, trapped among thousands of displaced and dead on the Tohoku coast. Rei rushes to Tokyo, where she discovers Ishida Antiques may have been burglarized.

Rei takes Mr. Ishida’s abandoned dog, Hachiko, on a volunteer bus to the ravaged town of Sugihama. But Mr. Ishida’s got more work for her, since he lost contact with his antiques apprentice Mayumi and is frantic with worry. He won’t leave Sugihama without knowing the fate of the troubled 19-year-old girl from a famous lacquer-making family.

Calling on disaster survivors and volunteers–and her knowledge of Japanese manners and history–Rei investigates the suspicious disappearance. From Sugihama’s muddy shops and shelters, to the buzzing bars and bathhouses of Tokyo, it’s a suspenseful journey. But as Rei draws closer to the truth, she realizes that she’s being stalked. Who is following her–and can she survive the wave of danger she never saw coming?

THE KIZUNA COAST is the latest novel in a sexy, smart and humorous mystery series that has won the Agatha and Macavity international mystery awards and been nominated for the Edgar, Anthony and Mary Higgins Clark prizes. It’s bound to intrigue new readers and satisfy longtime Sujata Massey fans. (Description taken from Amazon)

Add to your Goodreads List
Buy: Amazon, Amazon Canada, Only $2.95 right now on your Kindle!

Praise for The Rei Shimura Mysteries (from Amazon)

“An appealing protagonist and memorable supporting characters blend smoothly with lessons in Hawaiian and Japanese history in a tale sure to win new readers for the series.”
–PUBLISHERS WEEKLY on SHIMURA TROUBLE

“Massey builds the bridge between mystery fiction and mainstream women’s fiction . . . A lively, intuitive view of contrasting societies and a young woman trying to find her place in the world.”
–FOR LAUDERDALE SUN-SENTINEL on THE TYPHOON LOVER

“A gifted storyteller who delivers strong characters, a tight plot and an inside view of Japan and its culture.”
–USA TODAY on ZEN ATTITUDE

“A totally captivating experience. A unique plot, exceptional protagonist, and some subtle cultural lessons are as beautifully arranged as a vase of cherry blossoms.”
—BOOKLIST on THE FLOWER MASTER

“Sly, sexy and deftly done. THE SALARYMAN’S WIFE is one to bring home.”
–PEOPLE Page Turner of the Week 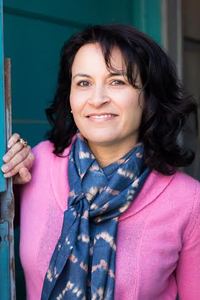 Sujata Massey was born in England to parents from India and Germany and grew up mostly in St. Paul, Minnesota. She holds a BA in Writing Seminars from Johns Hopkins University and started her working life as a features reporter for the Baltimore Evening Sun. After leaving the newspaper, she moved to Japan, where she studied Japanese, taught English and began writing her first novel, The Salaryman’s Wife. This novel became the first of many in the Rei Shimura mystery series, which has won Agatha and Macavity awards and been nominated for the Edgar, Anthony, and Mary Higgins Clark awards. Her August 2013 release, The Sleeping Dictionary, is a trade paperback with Simon & Schuster’s Gallery line, and also an audiobook published by Dreamscape. It’s the first in a series of historical suspense novels featuring Bengali women who each play a role in making modern India.

Sujata’s books have been published in more than 18 countries, and if she could redo her youth, she would have double-majored in history and a foreign language and spent a gap year (or two) abroad. Currently, she’s based near Washington, D.C.

Be sure to sign up for Sujata’s newsletter which offers a monthly update on book news, recipes and other fun aspects of Asian culture and the writing life.

3 copies of The Kizuna Coast up for giveaway!

Source: Giveaway copies provided by the author.  No compensation was received.