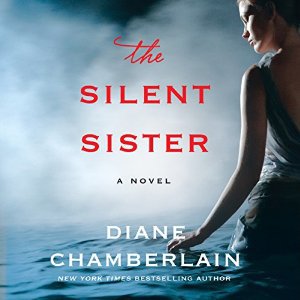 Diane Chamberlain is becoming a favorite author of mine. Her books are always so good! Her newest The Silent Sister was one that held me rapt from the first page to the last. It is a powerful and emotional story about love, forgiveness, and long held family secrets. The Silent Sister was one of the She Reads Books of Fall and while I’m late in getting my review posted I still have to say it’s another fantastic pick for the She Reads readers!

Riley has come after the death of her father to get all of his things sorted out. What she didn’t realize when she began cleaning out his house was that she would find anything after being away twenty years that would have the power to shake her world and change it forever but she was wrong. She does find something. Riley finds evidence that her older sister Lisa, who she has believed for her entire life committed suicide when she was a teenager, may actually be alive. Alive and living as someone else with a whole new identity and life.

Riley is full of questions. Where is Lisa? Why did she run away all those years ago? Was she running away from something or someone? The one thing Riley does know is that she has to find out. As she uncovers clues as to where Lisa may be she also begins to learn shocking truths about her family – the family she thought she knew and now realizes that she never really did.

The Silent Sister is one intricately woven fantastic mystery! I really enjoyed Riley’s journey to uncover her family’s life changing secrets. I listened to the audiobook which is narrated by Susan Bennett and she does such a great job. It is the first time I listened to her but it won’t be the last. She was the perfect choice for telling this tale!

Recommended for those who love women’s fiction and mysteries. Highly recommended!

Source: Digital review copy provided by the publisher for an honest review.  Audiobook personal copy.  No compensation was received.