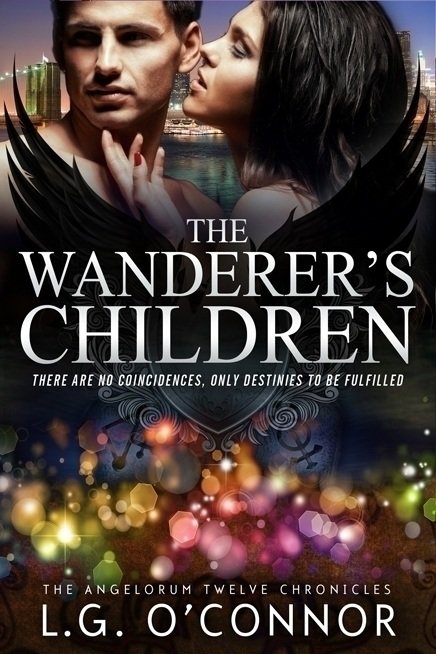 The Wanderer’s Children by L.G. O’Connor is the second book in The Angelorum Twelve Chronicles and it is a fantastic sequel to her debut novel Trinity Stones which I loved as well.  These books swept me into a world so different from my own and I am completely captivated by both the world building and the characters living within the pages.  As a note t here may be some spoilers ahead as it’s difficult to review the second book without talking about the first a bit so if you intend to read the books be forewarned as you go forward.

In Trinity Stones we meet Cara Collins who thought she was just a normal woman until she finds out she is actually a Soul Seeker and the first of the Holy Twelve. She also meets Simon who was her Trinity Guardian but is now her fiance.  They are to be married soon and Cara is in the midst of planning a wedding and if only that were her only concern but it isn’t.  There is a battle looming between good and evil and Cara and Simon along with the others will be right in the middle of it.  To top things off Cara seems to be going through growth spurts after having been injected with Nephilim DNA and she’s starting to panic about fitting into any wedding dress at all.  And then there is the problem she seems to be having with being attracted to men who are not her fiance even though she loves no one but him.  Jut what is going on?  Cara is knee deep in stress!

While Trinity Stones laid the base for the story and introduced us to the characters The Wanderer’s Children really takes us into their lives.  I loved that about this book.  I really got to know the characters this time around; to dig deeper into their lives – to care about them even more.  Michael is the Trinity’s Messenger and I liked him from the beginning but in this novel we delve into his past where he confronts his issues in order to move on with his life with Sienna and the Angelorum.  Simon is his usual impressive self that any sane woman would kill to be with since he’s not only gorgeous but he cooks too.  Then there’s Cara who is another one I liked from the beginning.  She’s a great character who is funny, loves passionately, and most importantly one who would die to protect those closest to her.

As things begin to heat up and the twelve begin to gather they learn new truths about themselves and  know that soon they will face the biggest battle of their lives.  The battle between good and evil.  Who will win?

Recommended for those who enjoy a fast paced and exciting story with a lot of steamy romantic scenes to spice things up!  I highly recommend the whole series!

1 copy of The Wanderer’s Children up for grabs!

Source: Review copy provided by the publisher for an honest review.  No compensation was received.