Happy Monday everyone.  I’ve got a great book to spotlight for you all today called A Sister to Honor by Lucy Ferriss which released on January 6.  This is on my list of books to read this year and I’m sure you’ll want it on yours as well.  Enjoy the spotlight. 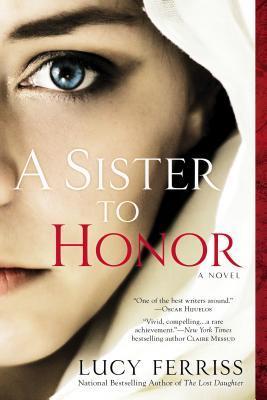 Afia Satar is studious, modest, and devout. The young daughter of a landholding family in northern Pakistan, Afia has enrolled in an American college with the dream of returning to her country as a doctor. But when a photo surfaces online of Afia holding hands with an American boy, she is suddenly no longer safe—even from the family that cherishes her.

Rising sports star Shahid Satar has been entrusted by his family to watch over Afia in this strange New England landscape. He has sworn to protect his beloved sister from the dangerous customs of America, from its loose morals and easy virtue. Shahid was the one who convinced their parents to allow her to come to the United States. He never imagined he’d be ordered to cleanse the stain of her shame…

Praise for A Sister to Honor

“Vivid, compelling, as ineluctable as a Greek tragedy, A Sister to Honor illuminates the complexity of globalism’s cultural disjunctions. Afia and her brother Shahid, live between two worlds—their traditional family in rural Pakistan, and New England’s liberal college culture. The intersection of these two risks destroying everything, and everyone. Lucy Ferriss’s nuanced insight enables us to see this story from all sides—a rare achievement.” —Claire Messud, New York Times bestselling author of The Woman Upstairs and The Emperor’s Children

“A Sister to Honor is a powerful exploration of faith, family, and the deep cultural divides that threaten to destroy these in our modern world. Ferriss has written a remarkable novel that strikes the perfect balance between the global and the personal.” —Ivy Pochoda, author of Visitation Street

“A young woman touches a man’s hand, and her family decides she will die. This brave novel makes sense of honor killings, a Middle Eastern custom so horrific that it’s hard to even contemplate in the West. Though uncompromising in her vision, Lucy Ferris is also generous, large-hearted. A Sister to Honor is not just about hate and violence, but about love in its many forms — romantic, maternal, filial. —Lisa Zeidner, author of Layover and Love Bomb

A Sister to Honor reveals that the walls between distant cultures and our own are porous. Literature becomes a transparent window, flooding the world with light…. I had always wanted a writer to name whatever it was that would be the opposite of “exotic.” And A Sister to Honor provides that answer: the opposite of “exotic” is “basic.” This lyrical novel wrestles marvelously with the basics–love, death, guilt, shame, strength…. Like Lorraine Adams’s Harbor, this is an urgent and ultimately political work of literary fiction that is also a brilliantly paced page-turner. —Amitava Kumar, author of A Foreigner Carrying in the Crook of His Arm A Tiny Bomb

“A collision of cultures between star-crossed lovers redefines the meaning of honor in this modern-day literary thriller. Once again, Lucy Ferriss has delivered a bold and engaging novel, one you’ll find impossible to put down.”—A. Manette Ansay, author of Vinegar Hill and Good Things I Wish You

“A wrenching story of Pakistani siblings struggling to adapt their expectations of love and trust to an entirely different American context where a Facebook post can lead to betrayal and the destruction of an entire family a world away. The story is told with compassion and insight into the traditions of both societies. I couldn’t put it down.” —Jenny White, author of The Sultan’s Seal

Born in St. Louis, Lucy Ferriss has lived on both coasts, in the middle of the country, and abroad. She is the author of nine books, most recently the novel The Lost Daughter, which was published by Berkley in February 2012. She has two sons and lives in Connecticut, where she is Writer-in-Residence at Trinity College. For more information please visit www.lucyferriss.com.

Source: Book Description taken from Goodreads. All other information obtained from the publicist. No compensation was received.