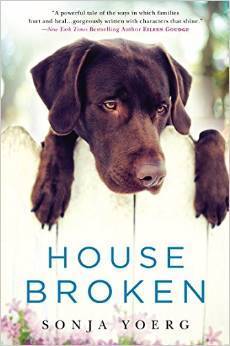 House Broken is a beautifully written debut novel by Sonja Yoerg.  It is a story about family and the secrets they carry.  It is about discovering why a family is broken and attempting to heal that break.  Falling through the generations this is the story of Helen, Geneva, and Ella and how the past almost always has an effect on the present.  And who can resist this cover?  Just gorgeous!

Geneva is a veterinarian who relates to animals so much easier than people (who doesn’t says this pet owner) but seriously animals are so much easier than people.  Nobody knows this better than Geneva when she gets a call from her brother saying that there is yet another problem with their mother Helen.  This time she’s been hurt in an accident because she was drunk and she’s hurt bad enough that she needs care which seems to fall in Geneva’s lap.  For as long as Geneva can remember her mother has been on a self-destructive path and she’s really not looking forward to having her around her two teens Ella and Charlie.  Still her husband thinks it’s a good idea as maybe she and her mother can work on their relationship together so Geneva reluctantly brings her to their home.

It isn’t long before Geneva realizes that her mother has no intentions of changing her ways and then there is the effect she’s having on Geneva’s kids which isn’t the best either.  Even more troubling is that Geneva can’t get her mother to talk about the past no matter how hard she tries and Geneva has so many questions about why her family is so broken.  As she delves deeper into the past though Geneva learns secrets that threaten to destroy the world she’s built for herself and she wonders if she shouldn’t have just left the past in the past.

House Broken was a great read for me.  I loved the characters, the writing, and most of all the dramatic story and I think it would make a fantastic pick for book clubs with the various themes woven throughout it.   It also has a conversation guide to get your book club’s discussion going .

At times heartbreaking but ultimately hopeful House Broken is a debut novel not to be missed! Highly recommended!

1 paperback copy of House Broken up for giveaway