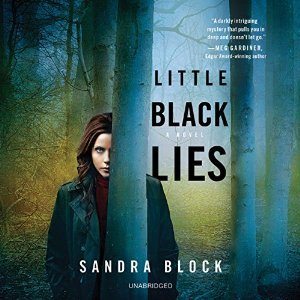 Little Black Lies is the debut novel of Sandra Block,  It is a psychological and suspenseful tale that held my interest from the beginning to the end and I enjoyed every minute.  I listened to the audiobook which is narrated by Kara Bartell who I have not listened to previously but would love to again.  I thought she did such an amazing job with the different characters and scenes throughout the novel.  As I listened to her I could picture this book as a movie in my head and that’s exactly what I look for from a narrator – bringing the story alive in my mind and making me feel as though I’m right there.

Zoe Goldman is a resident doctor on a psychiatric ward.  Having mental issues of her own she made the decision to spend her life helping those who suffer.  While Zoe listens to her patients and their stories we learn that she has some pretty major issues of her own that become apparent when she begins suffering from some wicked nightmares again.  She dreams of a fire that rages out of control and her fear and then the loss of her mother because of this fire.  She questions her adoptive mother but she’s suffering from dementia and isn’t always much help and upsets easily.  Yet there are a few times where she will make comments that mystify Zoe and make her even more determined to find out the truth that seems to be lingering in the far reaches of her mind.

Things become even more complicated for Zoe as she’s assigned a patient named Sofia.  Sofia  has been in mental wards most of her life having been accused of killing her mother.  As she talks with Sofia and tries to understand what this woman did she becomes even more obsessed with finding out the truth about her own birth mother and unlocking the meaning behind her nightmares and her own mental issues.  As she delves deeper and deeper into the mystery surrounding her childhood she realizes that the one person who can help her – her adoptive mother – is slipping away more each day.

Little Black Lies was a great listening experience for me.  I enjoyed Zoe as a character although a few times I would have liked to smack her but that’s besides the point.  It’s nice to see a character with a mental illness being successful in a career.  The ending is great with a twist that may surprise some readers.  Highly recommended for those who enjoy psychological, suspense filled books!

Source- digital review copy provided by the publisher for an honest review.  Audiobook from personal library. No compensation was received.