Happy Friday everyone – it’s almost the weekend!  Today I’ve got a Q&A with Jonathan Odell (canned Q&A), author of Miss Hazel and the Rosa Parks League as well as a spotlight and giveaway.  I love novels that portray the Civil War and the South so I’m really looking forward to reading this one.  In the meantime I hope you all enjoy the post and be sure to pop by the end of the post to enter for your chance to win one of 2 copies up for giveaway! 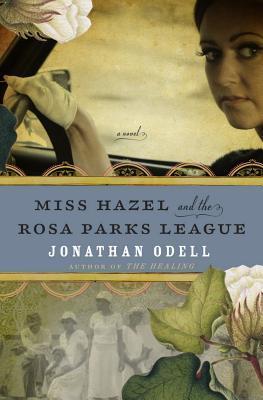 Miss Hazel and the Rosa Parks League is publishing on February 4th, 2015—Rosa Parks’ birthday and sixty years since the Montgomery Bus Boycott. How is Rosa Parks, despite not appearing as a character in your book, central to your story?

Rosa Parks’ symbolic presence courses throughout the narrative. When, late in the novel, word gets out about what she was up to in Alabama, her example inspires a group of women in Delphi, Mississippi—where my novel is set—to take radical action. Like poor, working black women across the country, this group of women strongly identified with Mrs. Parks.

Your novel is about many things—friendship, marriage, family, feminism, grieving the loss of children, redemption. Can you tell us a little bit about the inspiration behind the story?

A catalyst was reading Pat Conroy’s poignant novel, A Prince of Tides. My God, I thought. If he can write about crazy Southern families, why can’t I? I’ve got one.

I had two primary questions I wanted to answer. The first was, How did my family get to be the way they are? My mom and dad, both refugees from poor, backwoods farming families, much like Hazel and Floyd in the novel, somehow pulled themselves into a comfortable upper middle-class lifestyle. But like immigrants fleeing horrors of another world, they talked very little about their childhood. The second question was, What are the mechanics of making an entire race of people disappear into the background, as whites did to blacks in Mississippi during Jim Crow? The first question brought me into a new relationship with my parents. The second question took me deep into the world of racial prejudice, one I had been born into but taught not to see.

The two main characters, Hazel and Vida, are young mothers, one white and one black. Are they based on real people from your life?

A lot of the book is drawn from my early life experience, much to my family’s horror. Actually, the book began as an attempt to get even with everyone who had ever done me wrong—teachers, schoolyard bullies, my preacher, and, of course, my parents. Vida and Hazel began as absolute villains in my first draft. They represented people in my life I wanted to settle a score with. Vida represented Velner, a black lady my parents hired to take care of me and my brothers when my mother took a job. I hated Velner and Velner hated me.

Hazel is definitely my mother. When I began the book, I was going through therapy and beginning to understand my family’s dysfunction. I was in my “angry truth-telling stage,” so I “fictionalized” every wrong my mother had ever perpetrated upon me in the first draft. In essence it was a poorly disguised hit piece. I even named the little boy Johnny so my mother would not miss the point.

When I finally let go of my agenda of trying to justify my resentment, I fell in love with both women. Now, even today, when I see my mother, she is so much bigger and grander than the box I had put her in. By letting go of the need to explain her, I discovered her. Writing the book served as an avenue for reconciliation with my family.

Miss Hazel and the Rosa Parks League is a revised version of your debut novel, The View from Delphi, published ten years ago. Why did you decide to revise the novel?

The View from Delphi was released in 2004 by Macadam/Cage, a highly respected but small West Coast publisher (most well-known for publishing The Time Traveler’s Wife), to positive reviews but limited distribution. The publisher was falling on hard times; indeed, they later went bankrupt and folded. After the success of my second novel, The Healing (Nan A. Talese/Doubleday), Maiden Lane Press was convinced that my debut deserved to reach a larger audience, in a revised edition. I enthusiastically agreed to the project. Do overs may be common in kids’ games, but they are extremely rare in the world of publishing.

What are the differences between the two works?

The new title and cover better reflect the promise of the book, i.e., a 1950’s small-town Southern setting, an intimate feeling of family and friendship, a twining of black and white storylines, and an irreverent strain of humor.

Miss Hazel is a hundred pages leaner than Delphi and has been restructured so that the narrative flows more logically. There is less backstory and “side” story. The goal of this version was to tighten, intensify, and deepen the relationship between Hazel and Vida. I believe the result is a much richer read.

There have been comparisons of your book to The Help, yet Miss Hazel and the Rosa Parks League is quite different in many regards—not to mention that your book was originally published years before The Help. How do you feel about the comparison?

I believe I may be the only person in American who has not read The Help nor seen the movie. I hear both are quite entertaining and have stimulated a lot of needed conversation about race. But because I began writing (and reading fiction!) late in life, I mostly spend my time searching for books that inform what I am presently writing. When I finished writing the final draft of Delphi in 2001—having done research for it since 1988—I felt I was pretty much done with that era and topic and I moved on to the subject of healing during slavery times. Now I’m learning about Southern Pentecostal preachers, snake handlers, and gay life at the turn of the century Mississippi.

But what I gather the two books have in common is that both take place in the Mississippi, maids are involved, and each is written by a white author. So beyond than, I can’t personally comment.

Why does race appear so prominently in all your work?

It’s what I want most to understand. Frankly, I think the advice “write what you know” isn’t very helpful. What I know is boring—because I already know it. It doesn’t challenge me to get out of my habitual way of seeing the world. But the things I don’t know, and have the opportunity to discover, are what get me out of bed in the morning. For me to keep my enthusiasm and creative energy focused for the five or so years that it takes to write a novel, I find it essential to be writing about what I am drawn to know, what fascinates me, what consumes me, what expands me.

Miss Hazel and the Rosa Parks League is the story of two young mothers, Hazel and Vida-one wealthy and white and the other poor and black-who only have two things in common, the devastating loss of their children, and a deep and abiding loathing for one another.

After drunkenly crashing her car into a manger scene, gunning for the baby Jesus, Hazel is sedated and bed-ridden. Her husband hires Vida to keep tabs on his unpredictable wife. Forced to spend time together with no one else to rely on, the two women find they have more in common than they thought.

Together they join up with with a defiant group of house maids who have been inspired by what Rosa Parks is doing over in Alabama. This unforgettable band of women commence to turn their own little Mississippi town on its head.

Miss Hazel and the Rosa Parks League is told through the voices of local people, black and white, and grows naturally out of the pre-civil rights period of the Deep South. An irreverent vein of dark humor courses throughout the story, which contains no saints, only flawed souls. Although heroism is abundant, these are unlikely heroes, and just as unlikely to call themselves such. The voices of these compelling characters are as authentic as the author’s own Mississippi childhood.

Miss Hazel and the Rosa Parks League is an updated and revised version of The View from Delphi.

Jonathan Odell is the author of two novels, The Healing published by Nan A. Talese/Doubleday in 2012 and The View from Delphi published by MacAdams/Cage in 2004, which has been adapted and republished as Miss Hazel and the Rosa Parks League. Odell was born and raised in Mississippi, growing up in the institutional segregation of a small town. In college he became an activist and sold The Ebony Pictorial History of Black America door to door in black neighborhoods across the South while the Klan tried to discourage him. He now resides in Minnesota. Visit him on the web at JonathanOdell.net.

Source: Post information received from the publicist and taken from Jonathan Odell’s website.  Giveaway copies sponsored by the publicist.  No compensation was received.