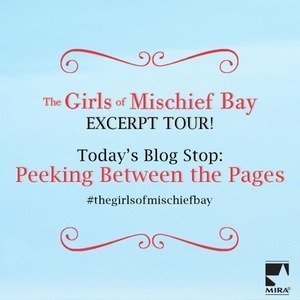 Good day everyone.  I’m excited to share with you today an excerpt from Susan Mallery’s newest book The Girls of Mischief Bay as she tours with TLC Book Tours.  There is also a fabulous California Dreamin’ Prize Package up for giveaway so be sure to pop by the end of the post for that.  Make sure to follow along with all the tour stops on this tour as all of the book excerpts follow along in sequence for the reader to enjoy and you can also enter the giveaway at all of those stops as well!  Last but not least I’m anxiously awaiting my tour date to review The Girls of Mischief Bay in March so keep a look out for that.  In the meantime enjoy… 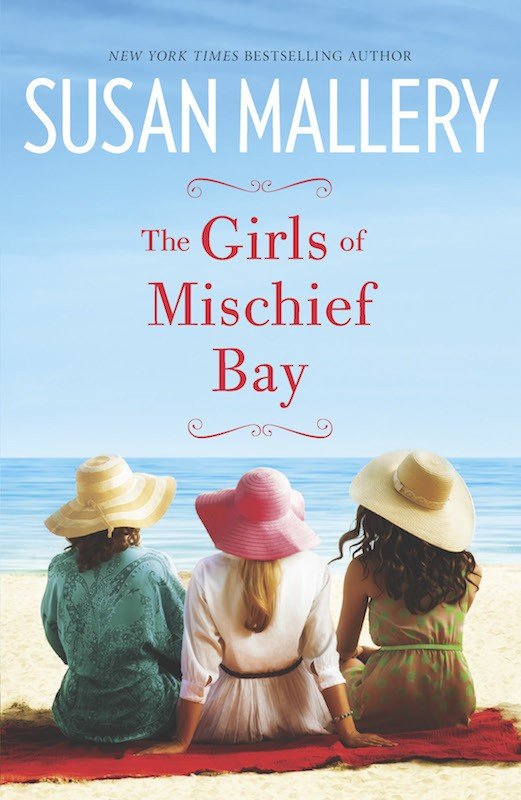 Excerpt from The Girls of Mischief Bay

He continued to look at her in a way that made her wonder if she’d forgotten to check her teeth or had grown a wart on her nose in the five minutes it had taken her to walk from the office to the bar. It couldn’t be that she looked different from her picture. She’d used a business head-shot. Nothing that would overpromise.

Olives was the kind of place that catered to locals and tourists alike. The bar was well-lit, without a diner feel. Tables were spaced far enough apart that you didn’t have to worry about everyone listening to your conversation. The restaurant was upscale-casual, with an eclectic menu. Except for a few paintings of olives and martini glasses on the walls, they hadn’t gone crazy with the motif.

Shannon liked it for a first date because she came here just enough to be familiar with the staff and all the exits. If a first date went bad, she could easily call for help or bolt. It was also within walking distance of her office, which meant she didn’t have to worry about a second drink before driving. If it was time to leave, but she wasn’t ready to get behind the wheel, she simply returned to her office and did something mindless until she was ready to make the six-minute commute to her condo.

“You’re staring at me,” she said, trying to keep her voice as friendly as possible. “Is something wrong?”

His eyes widened, then he glanced away before returning his attention to her. “No. Sorry. Jeez, I’m being an idiot. It’s just…you. Wow. You sent a picture and it was so great, I figured there had to be a mistake. Then when I saw you just now and you were even more beautiful in person…” He verbally stumbled to a stop, then cleared his throat.

“Can we start over or do you want to leave?”

His expression was both chagrined and hopeful. Shannon tried to remember the last time anyone had been so rattled by her looks. She knew she was pretty enough and when she made an effort, she could up her game, but she wasn’t the kind of woman who left men tongue-tied. Or staring.

She smiled. “We can start over.”

He chuckled and motioned to the server. “What can I get you to drink?”

She ordered a glass of the house red while he chose a Scotch. He added the fruit and cheese plate to the order. When they were alone again, she leaned back in her chair.

He was nice, she thought. A little awkward, which meant he didn’t date a lot. At least he wasn’t a player. She didn’t need any more of them in her life. Divorced, if she remembered correctly.

“What do you want to know?”

Everything that had been in his profile, she thought, wishing she’d paid just a little more attention. The thing was she didn’t like online dating. She counted on the service to screen the men and then moved fairly quickly to a meeting. For her, emails and a couple of calls didn’t provide any insight into how things would go in person.

“Do you live in the area?” she asked.

“Sure.” The smile returned. “I was born and raised right here in Mischief Bay. Most of my family is still in the area, which means it’s hard to get away with anything.”

“Do you try to get away with things?”

The smile turned into a laugh. “I gave that up when I was a teenager. I’m a bad liar and if I cross the line, I get caught. So I don’t bother with either anymore.”

His smile faded. “You’re not in to bad boys, are you?”

She had been, and had the heart scars to prove it. “Not anymore. They’re great in theory, but life isn’t about theories. It’s about real people who take the time to show up.”

They were on opposite sides of a small table. Adam leaned toward her. “You’re in finance?”

“Yes. I’m a CFO for a software company.”

She tried to speak normally, knowing that when she mentioned her job she tended to be both defensive and proud. An awkward combination at best.

The problem was some men resented her success and some men were intimidated by it. A few had seen her as a way to the easy life, but fortunately they weren’t usually very subtle about their hopes of being kept. The ones who accepted that she’d done well and worked hard were often the keepers, albeit rare and therefore hard to find.

“Are you in line to be president next?” he asked.

She smiled. “No. I’m comfortable being the queen of the checkbook. I like the financial side of things.” She shifted toward him and lowered her voice. “Software is not my thing. I’m better than most on a computer, but it’s never been easy for me. You should see some of the college kids we hire every year. They’re brilliant. What about you?”

She laughed. “Thanks for the share. I meant, tell me about your work.”

Impressive, she thought. “Foreman sounds like a lot of responsibility.”

Adam grinned. “I stand around and tell other people what to do. It beats a real job.”

Their server arrived with their drinks and the cheese plate. Adam raised his glass.

About The Girls of Mischief Bay

New York Times bestselling author Susan Mallery is world renowned for her “insightful, funny, and poignant” stories (Booklist). With her brand-new Mischief Bay series, Susan brings to vivid color the story of three friends on the brink of a new life.

Nicole Lord wants to be a good wife, but there’s a difference between being supportive and supporting her husband, who quit his job to write a screenplay she’s never seen. He won’t even help take care of their son, leaving Nicole to run the house and work full-time.

Sacrificing a personal life for her career is how Shannon Rigg became a VP at her firm, but she wonders now whether she made the right choice. An exciting new relationship with a great guy convinces her that it might not be too late—until he drops a bombshell that has her questioning whether she really can have it all.

Although Pam Eiland adores her husband, she feels restless now that the kids are grown. Finding sexy new ways to surprise him brings the heat and humor back to their marriage, but when unexpected change turns her life upside down, she’ll have to redefine herself. Again.

Through romance and heartbreak, laughter and tears, the girls of Mischief Bay will discover that life is richer with friends at your side. 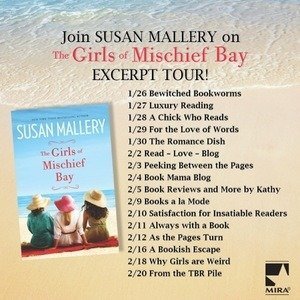 Praise for The Girls of Mischief Bay

“Best-selling romance author Mallery delves into light women’s fiction with this third Blackberry Island novel, maintaining her romantic charm and smooth voice yet embracing the freedom of a broader storyline with ease and a bit more depth.” Kirkus Reviews on EVENING STARS

“Mallery pulls out all the stops in this highly enjoyable and insightful, funny, and poignant look at self-sacrifice and romantic entanglement.”?Booklist, starred review, on EVENING STARS

“[A] joy for all of us who were rooting on the sidelines.”Publishers Weekly on EVENING STARS

“Will Nina prevail? Of course she will: this is romantic fiction. But the why and the how, and with whom, are all highly entertaining.”The Seattle Times on EVENING STARS 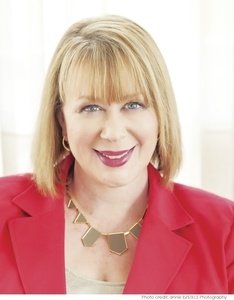 New York Times bestselling author Susan Mallery has won the hearts of millions of readers around the world with books described as “immensely entertaining, intensely emotional” (RT Book Reviews), “hilarious” (Fort Worth Star-Telegram), and “heartwarming” (Publishers Weekly). One major retailer recently described her as “the queen of romantic fiction.” While she deeply appreciates the accolades of critics and booksellers, Mallery is even more honored by the enthusiasm of her readers and the word-of-mouth that catapults her toward the top of the bestsellers lists time and again.

Mallery lives in not-so-sunny Seattle with her husband and a toy poodle who makes her laugh every day and who’s not even a little bit impressed by her growing fame. 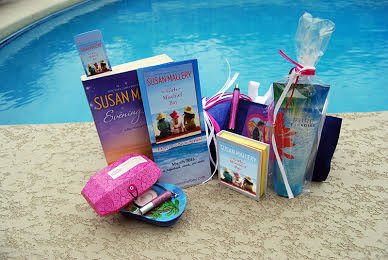 *CLICK HERE* and fill out the form to enter. 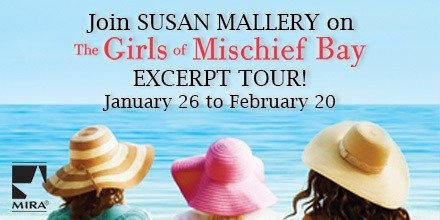 Source: Information included in the post received from the Tour Co. and Publisher.  Giveaway sponsored by the Publisher.  No compensation was received.