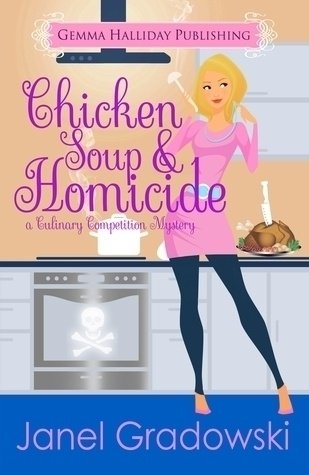 Chicken Soup & Homicide is the second book in the Culinary Competition Mysteries series by Janel Gradowski.  I read the first book Pies & Peril last year and really enjoyed it but I have to say that I liked Chicken Soup & Homicide even more.  What I like most about reading a cozy series like this is getting to know the characters and the town the books take place in and when some humor and a good mystery is thrown in it’s all the better.  This is the perfect book to curl up with in your favorite comfy chair or to read out in the sun that’s sure to come out sooner or later!

Amy and her friend Sophie are set to compete in the Chicken Soup Showdown.  They’ve got the perfect chicken soup and are up against other local chefs in their town of Kellerton, Michigan including the formidable Chef Britton.  Nobody is all that fond of the rude and obnoxious Chef Britton and that includes Amy’s friend Carla who once dated him.  As they get set to start the competition Amy has to run to the back to get something out of the freezer and boy does she find herself a big something.  Who but Chef Britton falls right out of that freezer and with a knife sticking out of his chest and deader than a doornail. Amy has to wonder what it is with her and finding dead bodies – once was enough and here she finds yet another one.

Needless to say trouble is brewing along with the ever present coffee pot (gotta love women who love coffee!).  Amy figures that Carla’s boyfriend Bruce who is a detective will be on the case and clear them all quickly but unfortunately he has to step down due to a conflict of interest.  Instead it is Detective Pitt and the only suspects he seems to have his eye on are Amy and Carla. Amy soon realizes that if she wants both herself and Carla to stay out of jail then she’s going to have to do some detective work of her own.  Hopefully she can solve the crime before she ends up a victim herself.

I really like the characters in this series especially Amy and Carla.  I really felt we got to know Amy on a different level this time as she struggles not only to clear herself of murder but is experiencing some marital woes as well.  The mystery is good as well and while I can usually pick out the culprit early on I didn’t realize this one until almost the end.  So yet another great addition to this series and I’m really looking forward to the next one and more adventures with Amy and her crew.  Highly recommended.