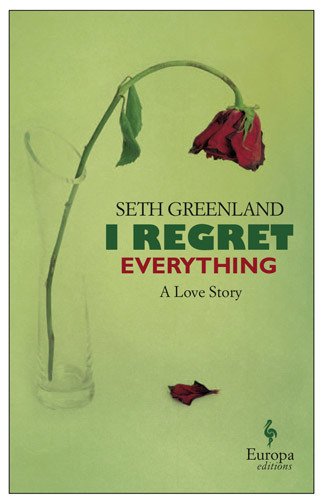 In I Regret Everything by Seth Greenland we are introduced to Jeremy Best who is a wills and trusts lawyer with a bit of a secret life.  He’s a poet who goes by the name of Jinx Bell and while he has been published in some literary journals he’s never become renowned for it.  That’s of course his dream but Jeremy has always taken the safe road with less risk and consequently he now finds himself filled with regret for all the things he hasn’t done.

Things get turned upside down for him when one day at the office he meets 19 year old Spaulding Simonsen, the bosses daughter.  Jeremy who is only 33 years old is considered to be already half dead according to Spaulding.  Yet she’s the one person who knows he’s the poet Jinx Bell and even more surprising she loves his poetry and seems interested in him.

There are so many reasons that Jeremy can come up with for not getting involved with Spaulding.  First she’s the bosses daughter, she’s only 19 years old, and he’ll certainly never make partner at the firm if the boss finds out he’s seeing his daughter.  And yet Jeremy can’t deny the strong attraction and pull he feels towards Spaulding.  Then Jeremy receives some shocking news that causes him to rethink his whole life and the way he’s always conducted himself.  And he gives in.  Despite the age difference Jeremy and Spaulding share many interests like poetry, conversation, and most importantly they love spending time with each other.

In getting to know Jeremy and Spaulding through the pages of this novel you soon realize how the two compliment each other and that their age difference really doesn’t make a difference.  Spaulding is the type of girl who lives by the seat of her pants and has had a lot of issues and then there is Jeremy who is calmer and has always played it safe.  The two open up to each other and in doing that they both learn that they can live their lives in a more fulfilling way.

I Regret Everything is a beautifully written novel; at times raw and real and at others poetic.  I really enjoyed it and would recommend it for those who enjoy literary fiction and a more modern take on a love story.

Source: Review copy was provided by the publisher for an honest review.  No compensation was received.