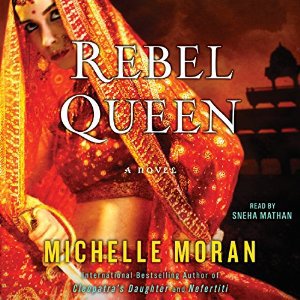 I was beyond excited to get to Michelle Moran’s Rebel Queen as I had been anxiously awaiting the time when she would release another novel.  I just knew it was going to be a good one and I was right!  I’ve loved all of Michelle’s novels but Rebel Queen is my new favorite.  Michelle Moran weaves fact with fiction and sweeps us on a journey to India where we are immersed in the culture and politics of the time.  Her stunning portrayal of this world and the strong women that inhabit it fully drew me in from the beginning and I just could not put it down.  I listened to the audiobook which is narrated by Sneha Mathan and she does such an incredible job.  She has a beautiful voice that literally carries you back in time to India and its people.  Between Moran’s beautiful writing and Sneha’s wonderful narration I found India coming alive before my eyes.

In the 1850’s when the British attempt to takeover India they assume it will be easy because at the time India was a bunch of kingdoms, not a country.  Not so in the Kingdom of Jhansi where they encounter one very strong woman who along with her female and male warrior guards have no intention of giving up their kingdom that easily.

The novel itself is told from the perspective of Sita, one of the female warrior guards who eventually becomes Queen Lakshmi’s most trusted guard.  Sita comes from a small village where she lives with her sister, father, and grandmother.  Being of a poor family, both of the girls have no dowry and without one their prospects of finding a suitable husband are not good.  While her grandmother tries to sell Sita to a temple where she will become a prostitute her father has a very different idea.  He trains her to become a member of the Durgavasi.  They are an elite group of women who are trained to guard and fight for the rani.  In doing this Sita will be able to support her family and provide a dowry for her sister.  Becoming one of the Durgavasi and the war on India changes Sita’s life in unforgettable ways.


While the story woven throughout this tale is captivating so is the history.  I know little about Indian history although it fascinates me and Moran so vividly brought to life so much of it within the pages of this book.  What really amazed me was this band of female guards especially at a time when such a thing was unheard of.  These were strong women who could fight with knives, arrows, and guns just as well as any man and they weren’t scared to do all they could to protect their queen.  And the Queen herself is such a rich historical figure.  To be so strong and capable of running a kingdom as she was is inspiring to women especially considering the times and how women were usually regarded.  She was a fair ruler and her utmost priority was always towards doing what was best for her people.

I could go on and on but suffice it to say this is a novel that a historical fiction fanatic should not miss.  I love that Michelle tackled a time and place not often written about and told such a mesmerizing story as she always does and even more for teaching me something once again.  This story, the characters, the culture, the history – all of it combines to bring the reader a truly captivating tale.  Highly, highly recommended!

Source: Digital review copy was provided by the publisher for an honest review. Audiobook from personal library.  No compensation was received.