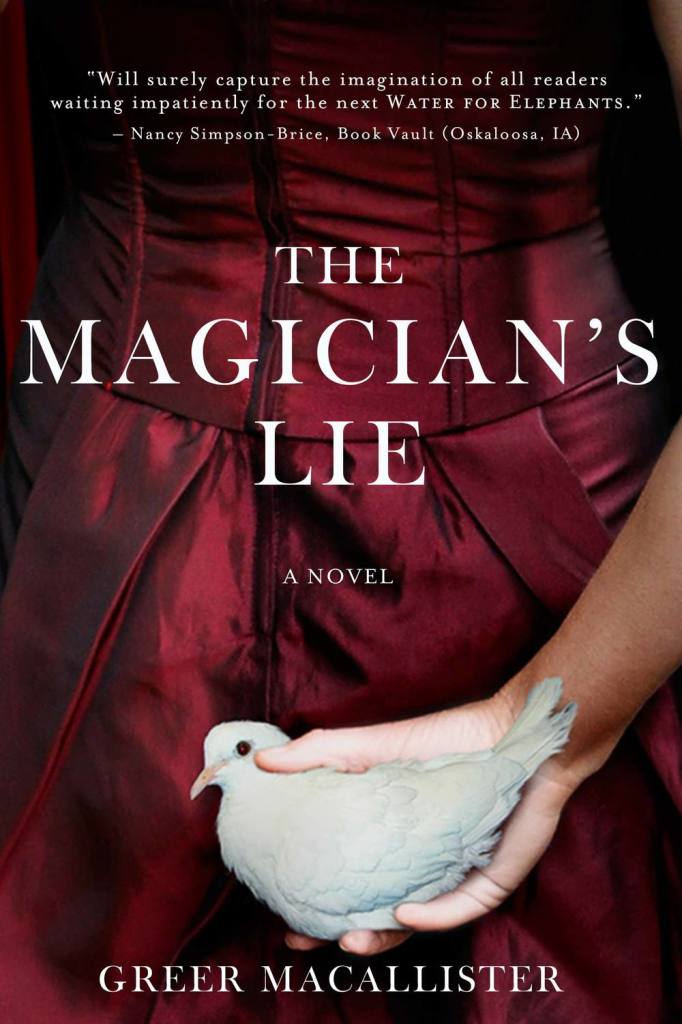 The Magician’s Lie is Greer Macallister’s debut novel and was chosen as a  She Reads Books of Winter selection and it is yet another fabulous book club choice.  The Magician’s Lie will take you on an adventure that captures your interest from the first page to the last.  I listened to the audiobook version which is narrated by Julia Whelan (who I adore) and Nick Podehl (who I haven’ t listened to before but would again).  It’s no secret that I love audiobooks that feature multiple narrators and this one is no exception.  Julia Whelan is a fabulous narrator she and Nick Podehl complement each other perfectly in telling this story.

The Amazing Arden is one of the first female magicians in 1905.  Of course this was a time when a female as a magician was unheard of but whether out of curiosity or the fact that her magic show was good people came to see her perform.  And perform she did.  Arden has loved to perform since her earliest memory.  As a young girl it was ballet but an injury put an end to that career.  When performing magic tricks or illusions as she liked to refer to them became an option Arden found she had a true talent for it and soon enough she became famous for her shows.

Arden is most known for her illusion of sawing a man in half on stage. This is the illusion she is performing the night that policeman Virgil Holt is attending the show.  When she uses an axe instead of a saw Virgil is curious but doesn’t worry too much about it thinking maybe it’s a new trick … until he hears that her husband has been found dead below the stage and even more alarming is that Arden is no where to be found.  She seems to have run off.  The question is why?  Is she guilty of murder?  Virgil is sure his luck is changing when he happens upon Arden running away.  This could make his career if he could bring in The Amazing Arden.  Of course he assumes she’s guilty.  Why else would she be running?

Arden begs Virgil to let her go and to further her cause she shares her story with him.  She tells him of her turbulent childhood and her struggles to get where she is in her career.  She tries hard to play on his sympathies and for his part Virgil is torn.  Does he believe her?  Or, being the illusionist that she is, is she just lying to him and he can’t tell the difference? And for us, the reader, that is the question as well – is she telling the truth or spinning a tale?  Read it and find out…

Highly recommended for historical fiction fans or for those who enjoy a good story.  I really enjoyed it and the audio production is great!

Source: Digital review copy was provided by the publisher for an honest review. Audiobook from personal library. No compensation was received.