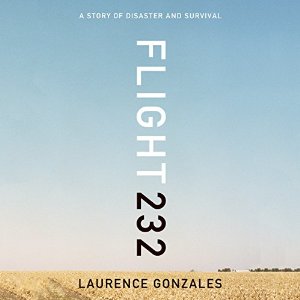 Flight 232 by Laurence Gonzales is a dramatic and emotional book.  It takes us back in time to 1989 and the true story of Flight 232, a fully loaded jumbo jet that crash landed in Sioux City, Iowa.  Of the 296 passengers aboard the flight, 184 survived.

I listened to the audiobook which is narrated by Victor Bevine and as Gonzales takes us step by step through what happened, Bevine brings it all alive in your mind’s eye.  This book evokes many emotions as you listen to survivor’s stories and for me the audiobook really added a deeper connection to the tragedy as it seemed so vivid in my mind as I listened.

Gonzales literally reconstructs the crash.  You can picture it in your mind as he describes survivors coming out from the corn fields that lined the runway.  He then describes interviews with survivors, the crew – anyone associated with the crash.  We follow the journey of the pilots, the flight attendants, and the survivors as they wonder if the last moments before the crash will truly be the last they have.  He also delves into the more scientific side of things that examines why the plane crashed.  It is truly scary that the smallest flaw can bring down such a huge plane and destroy so many lives that were on it.

Flight 232 is a fascinating account of the crash.  I am one of those people who watches  all of the shows on television that deal with plane crashes and if you’re anything like me I’d say this book is a must read or listen for you as well.  Even all these years later my heart goes out to all those who survived the crash and to those families left behind by the ones who didn’t.

Source: Review copy provided by Audible for an honest review. No compensation was received.