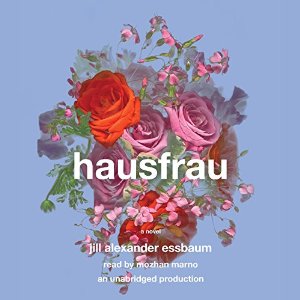 Hausfrau by Jill Alexander Essbaum is an intense book to the say the least. Do you ever read a book where the main character is someone you really dislike but still you are unable to tear yourself away? That is Hausfrau for me. I listened to the audiobook which is narrated by Mozhan Marno and she does an amazing job of portraying the main character of Anna in this story. To say the least I found myself addicted to listening to this story about a woman who is nothing but self-involved. And this is where the author’s superb writing skills come into the picture because she draws you into Anna’s life so fully that you find yourself needing to know more about this woman and why she acts out as she does and you can’t walk away until you do.

Anna describes herself as ‘a good wife, mostly’. She is a bored housewife who is very unhappy. She’s thirty-seven and living near Zurich with her husband Bruno and their three children. Anna is originally American and struggling with the language and ways in this new land. She’s seeing a therapist for her depression and taking a German language class. While this may all seem fairly normal, it isn’t. The way Anna chooses to deal with her issues is by having extramarital affairs and it seems the more risky they are the more excitement she feels. Yet even all of her affairs don’t seem to be making her happy and then one fateful day while she’s enjoying an afternoon of sexual bliss the unimaginable happens and Anna’s life spirals out of control.

Of course I didn’t like Anna. I thought her to be so selfishly involved in herself. She spent her time having affairs instead of with her children. She really has no ambition to be anything and that includes being a mother; she seems to have no friends or interests either. There just wasn’t anything to like about her and yet I can’t explain why I felt the need to continue listening to see what would become of this woman. I wonder if it was because I am so different from her that I was so fascinated by her need to systematically destroy her own life. I’m not sure but I do know that despite the seemingly dark tone of this book I really did like it and for me it was one of those compulsive type reads. It was like a train wreck that I couldn’t pull my eyes from.

I would recommend Hausfrau to those who enjoy literary fiction but be forewarned that there is quite a lot of raw sexuality in this book so if that isn’t something you can handle don’t pick this one up. It is however a novel that is still sticking in my mind. I listened to it a while back but could easily discuss it in an instant. Once again I have to mention that the audiobook is really well done. I think the subject matter of this book was all the more powerful in audio.

Source: Review copy received by the publisher for an honest review. No compensation was received.