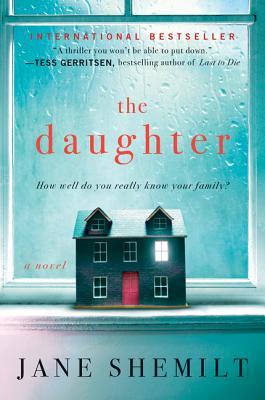 How well do you know the people you love and live with? The Daughter by Jane Shemilt is a She Reads Books of Spring selection and it takes us deep into the dynamics of one family as they struggle to deal with their grief and with what ‘they thought they knew’.  It’s a psychological thriller that captured my attention from the very first page and I couldn’t wait to get back to it each time I had to put it down.  It is fantastic!

Jenny is a busy doctor who wants it all and she has it or so she thinks.  Her husband is a neurosurgeon and she ‘s a mother to three teens and she strives for perfection in all areas of her life.  She tries to balance it all and feels she’s been doing a great job at keeping on top of her kid’s and husband’s lives.  One thing she’s quite sure of despite noticing her daughter has been acting out of the ordinary lately is that she knows her daughter and that Naomi tells her everything.  They keep no secrets from each other…so she thought until the day that fifteen-year-old Naomi disappears.  Then the facade that Jenny has built around her life begins to crumble.

A nationwide search ensues but soon enough days, weeks, and months go by and while clues are being discovered they still haven’t conclusively found out what happened to Naomi.  Jenny is a wreck unable to work or function properly and as the time passes she begins to discover secrets.  Secrets Naomi was keeping, her sons are keeping, and then there is her husband Ted.  What kind of secrets is he hiding from her as well?  Jenny’s perfect world is no more.

With Jenny struggling to deal with her daughter’s disappearance and all the secrets coming to light around her she decides to go and live at her family’s cottage.  It is there that Jenny reflects on the past and begins to see the many areas of her life where she could have done things differently.  She realizes how absorbed she was in herself and what she wanted for everyone.  Absorbed to the point of not being present in her kid’s lives.  She realizes she really didn’t have a clue what had been going on in Naomi’s life as she works to uncover the days and months before Naomi’s disappearance.  The more she discovers the more she realizes that the Naomi she thought she knew is not the Naomi that has disappeared.

This novel bounces back and forth between when Naomi disappeared to the present a year later with Jenny at the cottage.  I liked this setup because it kept me on the edge of my seat wondering what was next.  As I was reading I kept guessing at what had happened and I did pretty good up until the ending where the author surprised me.  It really makes you wonder how well you really know those you love and it also has you questioning if you too are ‘present’ in your life.  If you enjoy psychological thrillers The Daughter is excellent.  I loved it and I hope to see more from this author in the future.  Highly recommended!

Source: Copy received from the publisher for an honest review. No compensation was received.