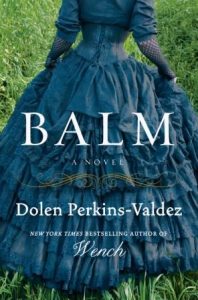 Balm is the second novel from Dolen Perkins-Valdez and yet another fantastic book from this author. Her first novel, Wench, which was incredible, dealt with the lives of people living during the Civil War while Balm addresses the time after as people struggled to rebuild lives shattered by the war.

Balm takes us into the lives of three people who are trying to move on after the war and while their stories are separate their lives intersect throughout the novel. First we have Sadie, a white woman, who was married off to a soldier by her parents.  However upon arriving in Chicago she finds herself a widow. Then there is Madge who was raised as a freeborn slave by her mother and two aunts. They were healers and this gift passed down to Madge. Last there is Hemp who doesn’t even remember his real name. He worked as a slave during the war and was only freed afterwards.

These three have been affected by the war but also by things internally within themselves. Sadie finds herself a wealthy widow who is lost … until the spirit of a young soldier who died in the war begins to talk to her and through her and she learns that she is a talented medium. Madge grew up learning about the different herbs and such that are used for healing. Her gift of being able to lay hands on someone and know what’s going on in their bodies is something she wants to explore further. And Hemp finds himself at an uncertain point in his life as he desperately searches for his wife who went missing in the war. They all have to find ways to move on from their past hurts and make new lives for themselves.

Balm is a powerful novel both in words and descriptions of how people’s lives changed in the aftermath of the war. It is a novel of healing and of hope. I really enjoyed it. Highly recommended for historical fiction fans.