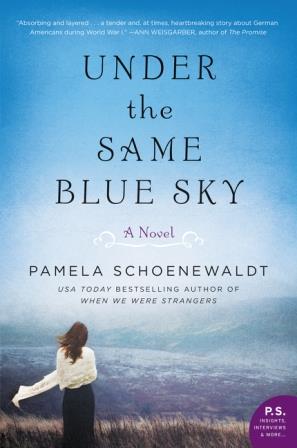 Having read Pamela Schoenewaldt’s first two books When We Were Strangers and Swimming in the Moon and loving them I was excited to read her newest novel Under the Same Blue Sky. As with her other books her wonderful storytelling shines through as she weaves fact and fiction in this emotionally wrought tale.

Hazel is a German-American living with her parents in Pittsburgh as World War I begins. Life changes for Hazel and her family as they are shunned because of their German heritage. Still Hazel has her dreams – dreams where she’s at a castle. Her mother just tells her it’s a dream but Hazel could swear it’s a memory. When an old family secret comes to light Hazel realizes her dreams may be more real than she ever could have imagined.

As Hazel searches for answers to her past she first takes a teaching position where she finds a town that she feels she fits into until her gift of healing instead becomes a curse. She moves on and discovers some answers to her past as well as beginning to find her place in the world. She also finds many new friends that become a very important part of her life, especially one young man named Tom. When he goes off to war she is left worrying about him all the time. When the opportunity to take a trip across the sea with her benefactor and boss arises she take it in the hopes of being able to find Tom who has gone missing. What the trip does is bring to light the horrific effects of the war and the devastation it has left everywhere.

What I enjoyed most about this book was the historical aspect. The author vividly brings to life how the war affected people during and after it ended. I liked Hazel’s story although I never really felt a connection to her until the end of the novel. I also felt it moved around a bit too much. While the characters are well developed I felt a bit jarred with the changing scenes maybe wishing that the book had been more focused. Still the story is an excellent one that showcases just how devastating the war was and specifically how it affected German-Americans and the soldiers.

Recommended for those who enjoy historical fiction. I’ll be excitedly looking forward to Pamela Schoenewaldt’s next novel once again!