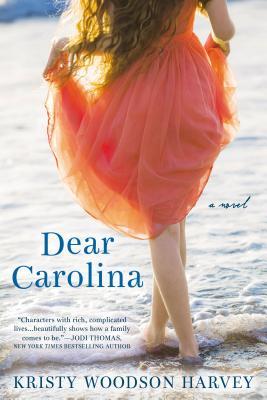 Dear Carolina by Kristy Woodson Harvey is a sweet Southern story that will warm your heart. It is the story of two mothers – one adoptive and the other biological and a beautiful little girl named Carolina. At its heart Dear Carolina is a love story – the love that we have for our children and the sacrifices we will make for that love.

This story is told in alternating points of view as both mothers write their journeys of love for baby Carolina. On one hand we have Khaki who has everything anyone could want and has always led a privileged life. She has a son, a great husband, and a career that she absolutely loves. The one thing she can’t seem to have is another baby and she desperately wants one. On the other hand there is nineteen-year-old Jodi, cousin to Khaki’s husband. Jodi has never had an easy life with a miserable childhood, an abusive boyfriend, and being in rehab. Things get a lot harder for her when she discovers she’s pregnant.

Jodi struggles with having the baby at all as she realizes that she can never give a child all it deserves but ultimately Khaki convinces her she should have the baby. It isn’t long before Jodi realizes that the pressures of having a baby may just send her back to rehab and while she loves her baby girl more than anything in the world she also knows that at this point in her life she’s unable to be the mother she wishes she could be. Meanwhile Khaki is desperately wishing she could keep Carolina while Jodi is deciding on how best to ask Khaki and her husband for the biggest gift they could give to baby Carolina.

I really enjoyed this novel. I think it’s such a beautiful idea for both an adoptive mother and a biological one to write letters to the baby. This novel also showcases the struggle that a birth mother can have in making that decision to give her baby up even though it may be best for the child. I only had a little bit of an issue with Khaki at times but I think that came from her over- privileged life and I also found it jarring at first with how different Jodi spoke compared to Khaki likely because I’m not from the South but I quickly became used to it.

Dear Carolina is the debut novel from Kristy Woodson Harvey and I look forward to her next one. Recommended for fans of Southern women’s fiction and I think that this is one novel that would be a good book club pick too with a lot of discussion sparked over adoption and issues with getting pregnant as just a few of the topics. Very enjoyable!