Happy Saturday!  I hope everyone is enjoying their weekend.  We are in the middle of a heat wave and the most enjoyable thing to do is simply sit inside with the air conditioning on full blast and read!  Today I’m spotlighting Watch the Lady by Elizabeth Fremantle, the last book in The Tudor Trilogy. I really enjoy Elizabeth Fremantle’s writing and of course I love historical fiction so I’m really looking forward to relaxing with this book.  In the meantime read on to learn more about the book and be sure to enter for your chance at winning a copy. 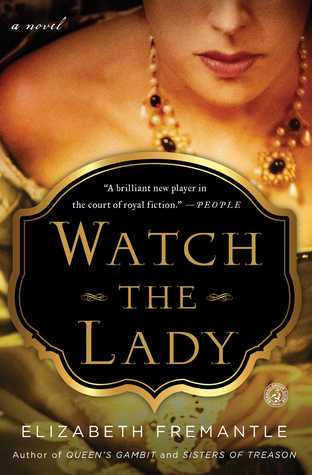 The daughter of the Queen’s nemesis, Penelope Devereux, arrives at court blithely unaware of its pitfalls and finds herself in love with one man, yet married off to another. Bestowed with beauty and charm she and her brother, The Earl of Essex, are drawn quickly into the aging Queen’s favour. But Penelope is saddled with a husband who loathes her and chooses to strike out, risking her reputation to seek satisfaction elsewhere. But life at the heart of the court is not only characterised by the highs and lows of romance, there are formidable factions at work who would like to see the Devereux family brought down. It seems The Earl of Essex can do no wrong in the eyes of the Queen but as his influence grows so his enemies gather and it is Penelope who must draw on all her political savvy to prevent the unthinkable from happening.

Told from the perspective of Penelope and her brother’s greatest enemy the politician Cecil, this story, wrought with love, hatred and envy, unfolds over two decades in which we see the last gasps of Elizabeth’s reign, and the deadly scramble for power in a dying dynasty.

Listen to an Excerpt
Add to your Goodreads List
Buy: Amazon, B&N

Praise for Watch the Lady

‘The research and historical detail are impeccable. Fans will enjoy this evocation of Elizabeth’s tumultuous court.’ The Times

‘Be transported to the court of Elizabeth I, where Penelope Devereux is prepared to do anything in the scramble for power. Watch The Lady by Elizabeth Fremantle combines fast-paced storytelling with rich period detail’ Good Housekeeping

As a child I was the one in the corner with my nose in a book who wanted to be a writer, but with the onset of a turbulent adolescence I left school, under a cloud, aged fifteen with nothing more than a fistful of O Levels and a hapless sense that things would somehow work themselves out. Eventually, after working in various dodgy dives – I’ve served grey scrambled eggs to squaddies at 5.30am; I’ve served vintage champagne to raucous hoorays; I’ve pulled pints for all and sundry – I managed to find myself, much in the way Forrest Gump always landed on his feet, working as a dogsbody on a fashion magazine. Over a decade, I worked for titles such as Vogue, Elle and The Sunday Times and contributed to many others. Marriage took me to Paris, a stint at French Vogue and the birth of my two gorgeous children but divorce saw me back home in London where I have happily remained. Fuelled by frustration with a fashion world that does no favours to women, I decided to complete my truncated education as a mature student which led, in a long and roundabout way with many frustrating impasses, to my fulfilling that childhood dream to become a novelist.

Elizabeth has a first in English and an MA in creative writing from Birkbeck, University of London. She has contributed to various publications including The Sunday Times, Vogue, Vanity Fair, The Financial Times and the Wall Street Journal. She also reviews fiction for The Sunday Express.

Elizabeth has contributed to The Tudor Times, in their edition about Penelope Devereux.

Source: Post info taken from the author’s website. Giveaway sponsored by the publisher. No compensation was received.