I’m so excited to share another of Elizabeth Fremantle’s books with all of you.  Sisters of Treason, the second book in The Tudor Trilogy, released in paperback on June 30 and to celebrate I’m going to give away a copy to one lucky reader!  Read on to learn more about the book… 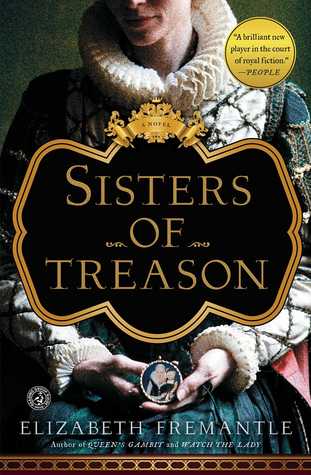 From the author People called “a must-read for Philippa Gregory fans,” a “terrifically entertaining” (The Sunday Times, London) novel about two sisters who must survive life in the Tudor court after the execution of their sister Lady Jane Grey who was queen for just nine days.

Early in Mary Tudor’s turbulent reign, Lady Catherine and Lady Mary Grey are reeling after the brutal death of their elder seventeen-year-old sister, and the succession is by no means stable. In Sisters of Treason, Elizabeth Fremantle brings these young women and their perilous times to vivid life.

Neither sister is well suited to a dangerous career at court. Flirtatious Lady Catherine, thought to be the true heir, cannot control her compulsion to love and be loved. Her sister, clever Lady Mary, has a crooked spine and a tiny stature in an age when physical perfection equates to goodness—and both girls have inherited the Tudor blood that is more curse than blessing. For either girl to marry without royal permission would be a potentially fatal political act. It is the royal portrait painter, Levina Teerlinc, who helps the girls survive these troubled times. She becomes their mentor and confidante, but when the Queen’s sister, the hot-headed Elizabeth Tudor, inherits the crown, life at court becomes increasingly treacherous for the surviving Grey sisters. Ultimately each young woman must decide how far she will go to defy her Queen, risk her life, and find the safety and love she longs for.

Praise for Sisters of Treason

“If you love historic royal fiction (with a dash of romance) you’ll want to pick up Elizabeth Fremantle’s Sisters of Treason, about two sisters reeling after the execution of their teenage sister, having been on the throne for just days.”– PopSugar

“An enthralling story of love and tyranny, Sisters of Treason brings the Tudor Courts to life again, in all their romance and horror.”– Leanda de Lisle, author of Tudor: The Family Story

“Fremantle’s story is vivid and tense, rich in all the drama that defined the Tudor Era, particularly the question of its future.”– AreCafe.com

“Sisters of Treason is thrilling historical fiction… Well-paced and highly entertaining…nearly impossible to put down.”– CompassBooksRatings.com

“Fantastic…engrossing…Elizabeth Fremantle does a superb job, giving us a rich, psychological dimension to all the characters in this novel…displays the hidden, rich lives of women…which are sometimes…left understated in the history books.”– A Bibliophile’s Reverie

As a child I was the one in the corner with my nose in a book who wanted to be a writer, but with the onset of a turbulent adolescence I left school, under a cloud, aged fifteen with nothing more than a fistful of O Levels and a hapless sense that things would somehow work themselves out. Eventually, after working in various dodgy dives – I’ve served grey scrambled eggs to squaddies at 5.30am; I’ve served vintage champagne to raucous hoorays; I’ve pulled pints for all and sundry – I managed to find myself, much in the way Forrest Gump always landed on his feet, working as a dogsbody on a fashion magazine. Over a decade, I worked for titles such as Vogue, Elle and The Sunday Times and contributed to many others. Marriage took me to Paris, a stint at French Vogue and the birth of my two gorgeous children but divorce saw me back home in London where I have happily remained. Fuelled by frustration with a fashion world that does no favours to women, I decided to complete my truncated education as a mature student which led, in a long and roundabout way with many frustrating impasses, to my fulfilling that childhood dream to become a novelist.

Elizabeth has a first in English and an MA in creative writing from Birkbeck, University of London. She has contributed to various publications including The Sunday Times, Vogue, Vanity Fair, The Financial Times and the Wall Street Journal. She also reviews fiction for The Sunday Express.

Elizabeth has contributed to The Tudor Times, in their edition about Penelope Devereux.

A Day in the Life of Author Elizabeth Fremantle