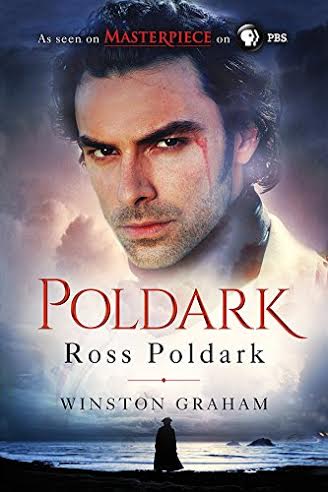 I am really excited to be part of The Ross Poldark & Demelza Blog Tour which kicked off on July 6 and will run through to August 3.  The blog tour is to highlight the tie-in editions of of Ross Poldark & Demelza which are the first two novels in The Poldark Saga by Winston Graham.  These two novels have recently been adapted for television for the new Masterpiece Classic PBS’s series Poldark, which began airing on June 21 and will run through to August 2.  Now I haven’t watched the series yet although I want to.  I really wanted to read the books first and while I’ve only read Ross Poldark so far I have to say that I am already hooked on the series and will continue to read through all twelve novels.  First though, my review of Ross Poldark which I loved…

The series begins with Ross Poldark returning to England after fighting in the Revolutionary War.  Upon arriving home he is stunned to learn that his father has passed, the family home is nothing like he remembers. the finances are in a shambles, and Elizabeth, the woman he loves,  is engaged to marry another.  Everyone had thought Ross dead and now all he can do is move forward so he sets about restoring his family’s lands all the while still pining for Elizabeth.

Ross, while being of the local gentry, is also a man who befriends the workers and this doesn’t always make him very popular among his own people.  Still they are even more shocked when he rescues the young Demelza from an abusive home and gives her a job as a house maid.  Soon enough Demelza grows into a beauty and she is devoted to Ross who soon enough realizes that she isn’t that little scruffy girl he rescued so long ago.  Will Ross succeed at restoring his family’s heritage and will the lovely Demelza manage to eventually capture his heart?

This novel is so much about the characters living within its pages, the time period, and the setting of Cornwall.  The author breathes life into all these aspects of the book so much so that you feel a part of life back in the 18th century.  It’s not fast paced but the author slowly enfolds you in the story and you find that you just can’t put it down.  It’s also nice and clean which is something I really enjoyed (no rape and a sweet romance), and even more it showed women of this time period in a good light.  Ross is respectful and caring and Demelza is of a spunky nature and with Ross she is allowed to explore that.  The two of them together are quite funny at times.  There are other great characters as well and I look forward to continuing on in the series and getting to know them all better.

While I’m positive I’d love this book even in paper form I did listen to the audiobook which is narrated by Michael Maloney who I thought did a wonderful job of telling this story.  His talent with voices and just the different ways he portrayed scenes really added to my enjoyment of the book.

Ross Poldark is a fantastic start to this series.  I don’t know how I’ve managed to never hear about this series before but I’m so glad I have now.  Check back for my review of Demelza coming next week.   Definitely a must read for historical fiction fans and even for those just looking for a good story and series to sink into!  Highly recommended! 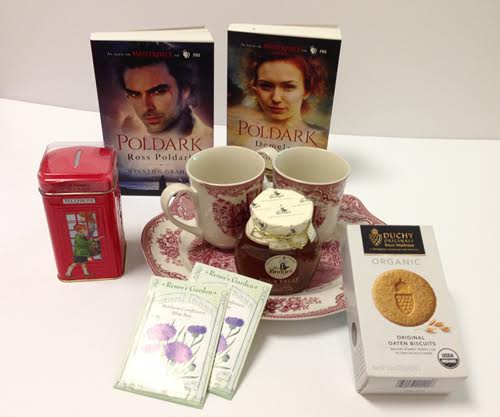 In celebration of the re-release of Ross Poldark and Demelza, Sourcebooks Landmark is offering three chances to win copies of the books or a grand prize, an Anglophile-themed gift package.

Two lucky winners will each receive one trade paperback copy of Ross Poldark and Demelza, and one grand prize winner will receive a prize package containing the following items:

To enter the giveaway contest simply leave a comment on any or all of the blog stops on the Ross Poldark Blog Tour starting July 06, 2015 through 11:59 pm PT, August 10, 2015. Winners will be drawn at random from all of the entrants and announced on the Buzz at Sourcebooks blog on August 13, 2015. Winners have until August 20, 2015 to claim their prize. The giveaway contest is open to US residents and the prizes will be shipped to US addresses. Good luck to all!

Don’t forget to follow along with all of the tour stops (click here for the full list of tour stops) and comment on each including mine to be entered in this fantastic giveaway prize pack!

“If Jane Austen met Charlotte Bronte and they drank too much port,
the Poldark Saga would be their literary love child.” — Poldarkian.com