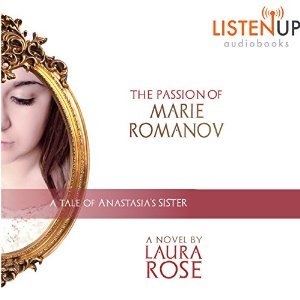 If you’re anything of a history buff you likely already know about the Romanov family and their horrible end and in The Passion of Marie Romanov, Laura Rose brings that history to life.  I listened to the audiobook which is narrated by Lillian Webb and Travis Smith and they bring even more power and emotion to the story.  The majority of the story is narrated by Lillian Webb as the narrative itself is told by one of the Romanov daughters Marie.  The ending is narrated by Travis Smith who in a very realistic way brings the tragic end of the Romanov’s alive in our minds.  Very well done by both narrators who kept me rapt throughout the telling of the Romanov’s story and the very beautiful writing of Laura Rose.

The story is told from the perspective of the third Romanov daughter Marie and is based on original diaries and letters written by her.  It’s a fascinating although terribly sad accounting of what happened to the Romanov family as they were kept in captivity.  When taken the Romanov’s were told they were being taken somewhere safe and so they assumed their privileged lives would carry on as they had.  It wasn’t long until they realized it wasn’t so when they were unable to even get proper provisions such as food and were no longer treated to the finer things like butter and coffee.  At one point the guards even whitewashed their windows effectively cutting them off from the world.  As it is historical fiction there are some things like the romance Marie has with a guard brought into the picture.  For me I can see a young girl of nineteen yearning for love but I’m not sure that within the time period that the Romanov’s would have lived that a well brought up girl would have carried the romance as far as she did or even had the opportunity to do so.  That aside the story is so beautifully told but I will say that the ending is not for the faint of heart.  The Romanov’s execution is brought to life in vivid detail and I think that’s to portray the unfairness and downright evilness that was done to this family.

I have read a bit about the Romanov’s in the past including researching them a bit on the internet because their story is so tragic.  To imagine that people can kill others so brutally is so horrific to me.  One has to wonder how history would have changed had they all been allowed to live.  I found this account by Laura Rose to be rich in historical detail with a fictional story weaved throughout that will definitely entice the historical fiction fan. Highly recommended … especially in audio!

Listen to a Sample
Add to your Goodreads List
Buy: ListenUp Audiobooks, Audible

Source: Review copy provided by ListenUp Audiobooks for an honest review.  No compensation was received.