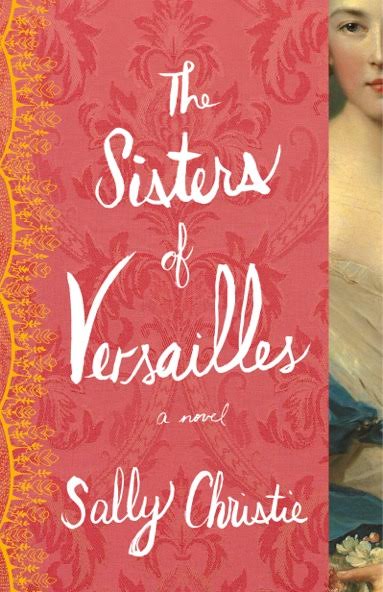 The Sisters of Versailles by Sally Christie is just the beginning of a historical fiction trilogy about King Louis XV of France and the women who captured his heart and shared his bed.   This novel is rich in details of the era and it has one feeling as though they are at court and experiencing all that it had to offer which includes all the court intrigue and backstabbing to get ahead in the King’s affections.  The Sisters of Versailles centers around the five Nesle sisters with the spiciest tidbit being that four of them became mistresses of the King.  How’s that for court scandal?

As I began reading this novel I couldn’t believe something like this could happen … but happen it did.  The story of the sisters is true in every detail making it even more intriguing.  We all know that in matters of the King and the court people will destroy anything in their paths to get ahead in the favors of the King but sisters?  The five Nesle sisters – Louise, Pauline, Diane, Hortense, and Marie-Anne were close as girls but that all changed when Louise became mistress to the King.  Back at the convent Pauline plotted to get an invite to court and once she did plotted to take over her sister’s place as the King’s mistress.  It doesn’t stop there though as when those two sisters are out of the way Marie-Anne, once thought to be the kind and sweet one, turns out to be even more vicious in her efforts to secure her place with the King… even to the point of involving her sister Diane.  Wow you say!  Right!  It reads like a good soap opera but it’s all true!  With sisters like these who needs enemies?

Hortense is the only sister who never became a mistress to the King and she never had a desire to.  Louise was the first but she was much to naive and caring to survive the court and that’s exactly why she had been so easily replaced by her sister Pauline.  Pauline was not someone to like.  She was mean and had no trouble pushing her sister away.  The true evil one though was Marie-Anne.  She was very crafty and meant to secure her position in any way she could including pretending that she didn’t even have a sister named Louise.  Truly I’m still shocked that sisters could treat each other in such a manner but I imagine that’s what greed and the need for power does to some.

The Sisters of Versailles is told from the viewpoints of all the sisters.  I liked how the author clearly let us know which sister was speaking and the letters she included from the sisters to each other really let the reader know how the sisters were feeling emotionally.

Rich in historical detail The Sisters of Versailles and all the juicy happenings (all the better as they are true) are sure to please the historical fiction fan!  I really enjoyed it and I’m already looking forward to the next in the trilogy!

Please remember to pop by next week as I spotlight a bio on Pauline, one of The Sisters of Versailles!