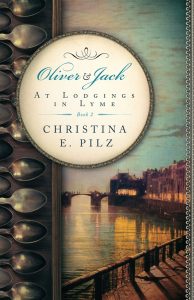 Having read Fagin’s Boy last year I was excited to once again delve into the world of Oliver Twist with  Oliver & Jack at Lodgings in Lyme by Christina E. Pilz.  This is the second book in the series and while I think they stand alone quite well reading both will give the reader a richer experience.  In Oliver & Jack at Lodgings in Lyme we are treated to a beautiful but forbidden love story as Oliver and Jack struggle to make it in a world that will never accept their love or loyalty to each other.

Oliver and Jack are forced to flee London or face their deaths after Oliver commits a murder to save his thieving companion Jack.  They decide to head to Lyme Regis as Oliver desires to find his family and then hopefully he and Jack can have a better life together.  However on the way Jack becomes very ill from a concussion.  Oliver manages to find them shelter but as Jack recuperates the doctor’s bills add up and Oliver has no choice but to go to work cleaning fish.  Needless to say Oliver is not exactly cut out for manual labor but he’ll do anything for Jack. That’s really where the struggle for Oliver lays.  He’s so concerned with being respectable and not sinning but he can’t deny his feelings for Jack any longer… and neither can Jack and in a time when gay relationships weren’t acceptable it can be a very dangerous path to take.

Did I Fancy It…

I really enjoyed this second installment in the series.  Oliver is really coming into his own and becoming the man he’s meant to be and I’ve always liked the straight talking Jack.  It’s interesting to watch their love come alive and grow and I’m looking forward to the next book in the series to see how it all unfolds especially as this book ended on a note that makes me anxious to see what happens next.  Recommended for those who have loved Oliver Twist and are curious to see one author’s take on how his life may have evolved.  I’ve very much enjoyed the series so far!

Source: Digital review copy received from the publisher. Giveaway sponsored by the tour company. No compensation was received.