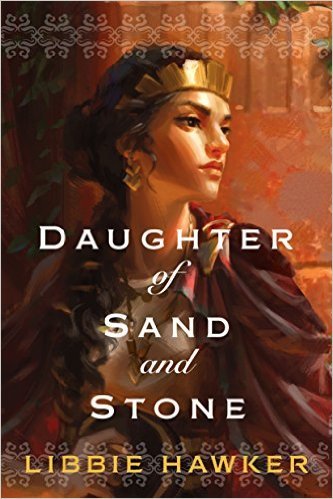 Daughter of Sand and Stone by Libbie Hawker is a novel that seamlessly weaves history with fiction bringing an ancient world to life within its pages. The author has taken Zenobia, a woman from history, and literally breathed life into her and the lands she ruled for a short time.  Libbie Hawker writes in such a descriptive way that I felt a part of this ancient world she wrote about from the dry desert to the camel rides.

In the author’s note Libbie makes it clear that not a lot is known about Zenobia, the Empress of the East, but what is known is that she was the only woman who had proved to be a threat to ancient Rome.  She was a strong and courageous woman in a time when women ‘had their place’ and that certainly didn’t include leading armies and taking control over lands.  I feel the author did a wonderful job of telling what Zenobia’s life story may have been from the time she was young to when she’s finally captured as what is available about her is mostly myth and legend.  She portrayed Zenobia in such a way that she came across as very real.  A woman like any other except that she had an inherent desire to be more than her culture allowed women to be.

I also have to mention that I felt an emotional connection to this story which is really odd for a historical novel.  I’m not entirely sure I would have liked Zenobia had I known her just because of her raw ambition that didn’t allow for much else but as the author told of her rise and then her capture and fall I felt so sad for this woman who really only wanted to do right by her people.  There was even a few points where I felt very close to shedding a few tears.

Zenobia was a warrior. She was a proud woman who only wanted to control her own destiny and that of her people.  I hadn’t known much about her before reading this book and after reading it I can say that I greatly admire her courageous spirit.  Highly recommended for fans of historical fiction!