Today I’m spotlighting The King’s Sisters by Sarah Kennedy which is the third novel in The Cross and Crown Series.  I’ve read and would recommend the first two novels, The Altarpiece (my review) and City of Ladies (my review), which I enjoyed a great deal so I’m looking forward to this one soon as well.  For now read on to learn more about the book. 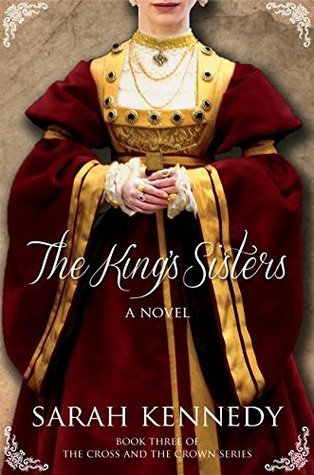 The King’s Sisters continues the story of Catherine Havens, a former nun in Henry VIII’s England. It’s now 1542. Another queen, the young Catherine Howard, is executed for adultery and treason, the Catholic church is fully suppressed, and Henry VIII still rules over an increasingly unruly England. The boy who will be king is growing, and the line of Tudor succession seems secure. But Henry has grown secretive and suspicious, especially of women.

Catherine Havens is living with her young daughter at Richmond Palace, in service to Henry’s rejected fourth wife, Anne of Cleves. When the Howard queen dies, Anne of Cleves believes that she may become Henry’s wife again. But the mood of the country is gloomy. The king is melancholy, and his growing circle of spies are watching for any misbehavior. Inevitably, their eyes fall onto the household at Richmond.

Catherine has secretly been indulging the attentions of a widower, and she finds herself, just as the court turns dark once again, carrying a child. She is unmarried . . . and now fears that permission to wed for a second time will be denied. Lent is approaching, and no marriages can take place during that time. A woman of Catherine’s station cannot bear a child without a husband by her side, and Catherine’s choices are limited to three break the law and marry without permission, conceal the pregnancy and hide the child away, or end the pregnancy before it is discovered.

As she agonizes over her choices, Catherine finds herself trapped among the king’s new spies. Anne of Cleves brings yet more attention to their household with her hopes of becoming queen. Will Catherine’s misstep ruin the chances of her mistress to become queen? And worse, will she herself fall victim to the spies’ desire to bring information to the king?

Catherine still has her friend Ann Smith to give her advice, but the laws of the land do not favor women–and unmarried women have few refuges. Former nuns, even wealthy ones, have even fewer choices . . . and all of them involve risk.

In a world where love is labelled a sin and error is called heresy, will Catherine follow the rule of English law or the rule of her conscience? And can she escape the dangers of being one of The King’s Sisters? 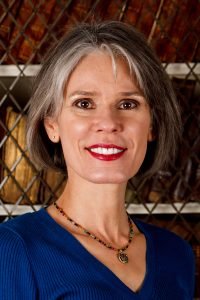 I was born in Indianapolis, Indiana. After completing a Ph.D. in Renaissance poetry, I took a position at Mary Baldwin College in Staunton, Virginia, where I currently teach creative writing, both on campus and on line, and head the English Department. When I completed an M.F.A. in Poetry Writing, I began writing historical poetry.

Seven books of poems later, I’ve turned my scholarly interests in Tudor England to fiction. Everything has now come together, and in The Cross and the Crown series, I can finally bring Tudor England to life. When I began researching the fates of nuns under Henry VIII, I didn’t imagine that the record would be so scattered . . . and that it would take an act of imagination to bring these women to life!

I teach writing and literature at Mary Baldwin College, where I am Professor of English and Head of the English Department. Please visit my department at http://www.mbc.edu/english and see what we are up to!

When I’m not researching, teaching, or working on my next book, I spend my time traveling, gardening, cooking, and watching the birds—and sometimes bears—that visit my yard in Virginia.