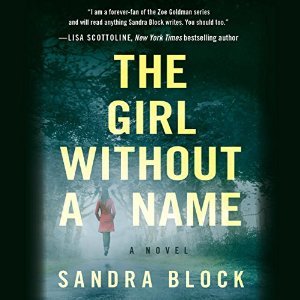 In what passes for an ordinary day in a psych ward, Dr. Zoe Goldman is stumped when a highly unusual case arrives. A young African American girl, found wandering the streets of Buffalo in a catatonic state, is brought in by police. No one has come forward to claim her, and all leads have been exhausted, so Zoe’s treatment is the last hope to discover the girl’s identity.

When drugs prove ineffective and medical science seems to be failing, Zoe takes matters into her own hands to track down Jane Doe’s family and piece together their checkered history. As she unearths their secrets, she finds that monsters hide where they are least expected. And now she must solve the mystery before it is too late. Because someone wants to make sure this young girl never remembers.

The Girl Without a Name is a powerful novel of memory and forgetting, of unexpected friendship and understanding…and of the secrets we protect no matter the consequences.

Having listened to Little Black Lies by Sandra Block and really enjoying it I was excited to also listen to The Girl Without a Name because it featured the same main character from the first one – Dr. Zoe Goldman.  This book does pick up where the last one ended but still I think it could stand on its own although of course one would enjoy the story much more having read the first one and being familiar with the characters.  The story revolves around Zoe, her boss, and a girl that’s brought into the mental ward in a catatonic state.  It’s an unusual case and one that really intrigues Zoe especially as no one comes forward to claim this girl that they end up calling Jane.  And in true fashion Zoe starts to investigate but what she finds is far more than she ever expected.

I really like Zoe as a character.  She herself suffers with a mental illness and sees a psychiatrist.  It’s one of the things I really like about this series is that it shows that someone suffering from a mental illness can excel in anything they want to.  While I enjoyed Little Black Lies a bit more I still enjoyed this second book in the series and I really hope that there will be more to come.

I listened to the audio version which is narrated by Jennifer Nittoso who is new to me.  At first I wasn’t sure what I thought of her narration but as I listened I began to enjoy the tone of her voice.  I don’t know if that happens to others who listen to audios.  Sometimes it takes a bit to settle into the narrator’s voice and way of telling a story.  Ultimately I did enjoy listening to her and would again.

Recommended for those who enjoy psychological thrillers!

Source: Digital eBook copy was received from the publisher for an honest review. Audiobook personal copy. No compensation was received.