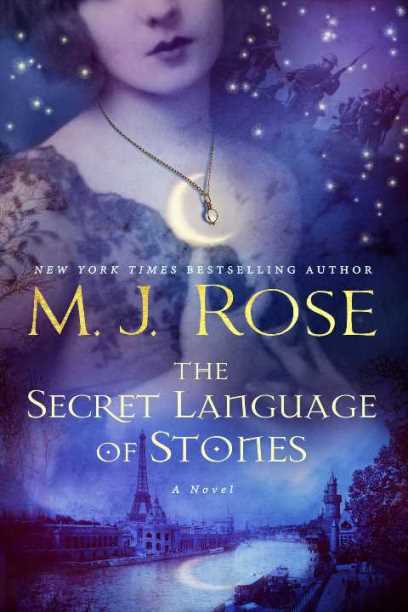 The Secret Language of Stones is the second book  in The Daughters of La Lune  series (easily read on its own) and it is an exquisite example of how beautifully M.J. Rose spins a tale. From the first to the last page I was enthralled in this story of history, magic, ghosts, and love set in Paris during World War I.

In this novel we meet Opaline Duplessi who works as a jeweller in a shop in Paris called La Fantasie Russie.  The owner of the shop, Pavel Orloff is her mentor and a Russian royalist who prays for the Romanovs return to power.  In her quest to help in the war effort Opaline crafts watches for the soldiers but her real gift is in creating talismans that enable her to hear the voices of the dead and she uses this to give comfort to the mothers of these soldiers by relaying their messages.  Normally she shares the messages she’s given and the soldiers move on but one soldier changes all of that.  She can’t seem to rid herself of this one and at times she’s sure she must be crazy. After all she’s communicating with a ghost and even more… falling in love with him.   Opaline’s journey takes her from war torn Paris all the way to England where she meets the exiled Romanov dowager and confronts danger head on as well as opening herself up to her power as a daughter of La Lune.

The Secret Language of Stones is a beautiful book.  I loved the storyline and learning about Opaline who is the daughter of Sadrine from the first book in the series entitled The Witch of Painted Sorrows.  The historical elements mixed with the vivid descriptions of the jewels  and the time and place captivated me fully and I enjoyed it so much.  I love this series and while the books can be read on their own I really think the reader would be missing out by not experiencing them all.  I will be anxiously awaiting the final book in the trilogy!  Highly recommended!