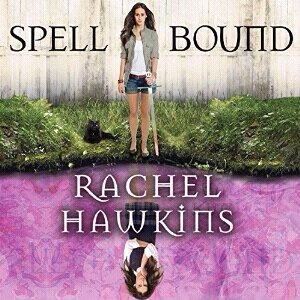 Spell Bound by Rachel Hawkins is the third book in the Hex Hall series and another winner. As with the first two books I listened to this one on audio as well. Once again it was narrated by Cris Dukehart who is officially one of my favorite narrators now. I like her tone of voice which makes her really easy to listen to and she is great at adding different emotions to the story which is always a plus in a good narrator and almost always makes the listening better.

I don’t want to say much this time around just in case someone wants to read the series but it may be impossible not to give away just a bit so if you are going to read them maybe it’s best you stop here.

The story picks up right where Demonglass left off and finds Sophie without her powers and as the story opens she’s already in trouble with no way to defend herself. When Cal told her to go to the Brannicks she was shocked enough as they are supposedly enemies of Sophie’s kind. Once she gets past the initial scuffle that greets her she is brought into the Brannick home where she finds out that there aren’t too many of them left and that they actually weren’t part of the attack on the Council. What comes as the biggest shock though is what Sophie learns of her own family and their roots.

As Sophie begins to unravel the secrets of her family she also begins to uncover a very dangerous plot with its origins at Hex Hall. First things first though she must get her powers back if there is any hope of fighting off the evil threatening to take over. It is this that leads Sophie into the most dangerous fight of her life … one in which the people she holds most dear or even herself may not make it out alive.

I really enjoyed this whole series and highly recommend it on audio if you like books with witches, warlocks, demons, etc.