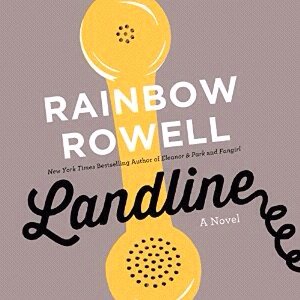 Landline by Rainbow Rowell is a book about love, marriage, second chances, and even more intriguing; a magic phone. I listened to the audio version of the book which is narrated by Rebecca Lowman. It was the first time I’ve listened to her but I wouldn’t hesitate to again. She’s very easy to listen to and she really added to my enjoyment of the story.

Georgie McCool has worked really hard in her career as a TV writer. When she and her writing partner Seth learn that their chance to have their own show is becoming a reality Georgie is beyond excited. The problem – it’s just days before Christmas and she, her husband Neal, and their girls have plane tickets to visit Neal’s mother in Omaha. Knowing Neal will be upset with her she still tells him that she’ll be staying home. Georgie figured they’ll have a quiet Christmas at home and is shocked when Neal picks up and heads off to Omaha without her. Even worse he won’t answer her calls.

Georgie has known for a long time that her marriage isn’t the best even though she and her husband still love each other. Her career dominates her time and Neal is left to raise the girls which is making him unhappy. Now when it seems her career dreams will be realized Neal has left her wondering if she hasn’t finally managed to destroy their marriage. When Neal finally does answer her calls its not her present Neal but the man she first met so many years ago. Talking to him has Georgie reflecting on the past and ultimately on what is really important in life.

I really enjoyed this novel. It makes a person sit back and think about what’s important in their own lives. Recommended for those who enjoy novels on marriage, love, and second chances with a little magic dust thrown in.