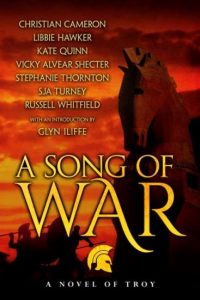 Today I’ve got a spotlight on a novel I’m very much enjoying called A Song of War by Christian Cameron, Libbie Hawker, Kate Quinn, Vicky Alvear Shecter, Stephanie Thornton, SJA Turney, and Russell Whitfield- a few of my favorite authors in this list.  Unfortunately I’ve got a sick puppy in the hospital again so I haven’t been able to finish the book but as soon as I do I’ll have a full review up for everyone.  In the meantime my apologies to the authors.  For now I’m going to spotlight the book and please be sure to enter the tour wide giveaway at the end of the post.

Troy: city of gold, gatekeeper of the east, haven of the god-born and the lucky, a city destined to last a thousand years. But the Fates have other plans—the Fates, and a woman named Helen. In the shadow of Troy’s gates, all must be reborn in the greatest war of the ancient world: slaves and queens, heroes and cowards, seers and kings . . . and these are their stories.

A young princess and an embittered prince join forces to prevent a fatal elopement.

A tormented seeress challenges the gods themselves to save her city from the impending disaster.

A tragedy-haunted king battles private demons and envious rivals as the siege grinds on.

A captured slave girl seizes the reins of her future as two mighty heroes meet in an epic duel.

A grizzled archer and a desperate Amazon risk their lives to avenge their dead.

A trickster conceives the greatest trick of all.

A goddess’ son battles to save the spirit of Troy even as the walls are breached in fire and blood.

Seven authors bring to life the epic tale of the Trojan War: its heroes, its villains, its survivors, its dead. Who will lie forgotten in the embers, and who will rise to shape the bloody dawn of a new age?

CHRISTIAN CAMERON was born in Pittsburgh, Pennsylvania in 1962. He grew up in Rockport, Massachusetts, Iowa City, Iowa,Christian Cameron and Rochester, New York, where he attended McQuaid Jesuit High School and later graduated from the University of Rochester with a degree in history.

After the longest undergraduate degree on record (1980-87), he joined the United States Navy, where he served as an intelligence officer and as a backseater in S-3 Vikings in the First Gulf War, in Somalia, and elsewhere. After a dozen years of service, he became a full time writer in 2000. He lives in Toronto (that’s Ontario, in Canada) with his wife Sarah and their daughter Beatrice, currently age four. And a half.

LIBBIE HAWKER was born in Rexburg, Idaho and divided her childhood between Eastern Idaho’s rural environs and the greater Seattle area. She presently lives in Seattle, but has also been a resident of Salt Lake City, Utah; Bellingham, Washington; and Tacoma, Washington. She loves to write about character and place, and is inspired by the bleak natural beauty of the Rocky Mountain region and by the fascinating history of the Puget Sound.

After three years of trying to break into the publishing industry with her various books under two different pen names, Libbie finally turned her back on the mainstream publishing industry and embraced independent publishing. She now writes her self-published fiction full-time, and enjoys the fact that the writing career she always dreamed of having is fully under her own control.

KATE QUINN is a native of southern California. She attended Boston University, where she earned a Bachelor’s and Master’s degree in Classical Voice. A lifelong history buff, she has written four novels in the Empress of Rome Saga, and two books in the Italian Renaissance detailing the early years of the infamous Borgia clan. All have been translated into multiple languages.

Kate has succumbed to the blogging bug, and keeps a blog filled with trivia, pet peeves, and interesting facts about historical fiction. She and her husband now live in Maryland with two black dogs named Caesar and Calpurnia, and her interests include opera, action movies, cooking, and the Boston Red Sox.

VICKY ALVEAR SHECTER is the author of the young adult novel, Cleopatra’s Moon (Arthur A. Levine Books/Scholastic, 2011), based on the life of Cleopatra’s only daughter. She is also the author of two award-winning biographies for kids on Alexander the Great and Cleopatra. She is a docent at the Michael C. Carlos Museum of Antiquities at Emory University in Atlanta. The LA Times calls Cleopatra’s Moon, “magical” and “impressive.” Publisher’s Weekly said it was “fascinating” and “highly memorable.” The Wall Street Journal called it “absorbing.”

STEPHANIE THORNTON is a writer and history teacher who has been obsessed with infamous women from ancient history since she was twelve. She lives with her husband and daughter in Alaska, where she is at work on her next novel.

Her novels, The Secret History: A Novel of Empress Theodora, Daughter of the Gods: A Novel of Ancient Egypt, The Tiger Queens: The Women of Genghis Khan, and The Conqueror’s Wife: A Novel of Alexander the Great, tell the stories of history’s forgotten women.

SJA TURNEY lives with his wife, son and daughter, and two (close approximations of) dogs in rural North Yorkshire.

Marius’ Mules was his first full length novel. Being a fan of Roman history, SJA decided to combine his love of writing and love of the classical world. Marius’ Mules was followed two years later by Interregnum – an attempt to create a new fantasy story still with a heavy flavour of Rome.

These have been followed by numerous sequels, with three books in the fantasy ‘Tales of the Empire’ series and five in the bestselling ‘Marius’ Mules’ one. 2013 has seen the first book in a 15th century trilogy – ‘The Thief’s Tale’ – and will also witness several side projects seeing the light of day.

RUSSELL WHITFIELD was born in Shepherds Bush in 1971. An only child, he was raised in Hounslow, West London, but has since escaped to Ham in Surrey.

Gladiatrix was Russ’s first novel, published in 2008 by Myrmidon Books. The sequel, Roma Victrix, continues the adventures Lysandra, the Spartan gladiatrix, and a third book, Imperatrix, sees Lysandra stepping out of the arena and onto the field of battle.

To win a paperback copy of A Song of War: A Novel of Troy by the H Team, please enter via the Gleam form below.

– Giveaway ends at 11:59pm EST on November 12th. You must be 18 or older to enter.
– Giveaway is open to US & Canada residents only.
– Only one entry per household.
– All giveaway entrants agree to be honest and not cheat the systems; any suspect of fraud is decided upon by blog/site owner and the sponsor, and entrants may be disqualified at our discretion.
– Winner has 48 hours to claim prize or new winner is chosen.

A Song of War

Source: All post information obtained from the tour company. No compensation was received.