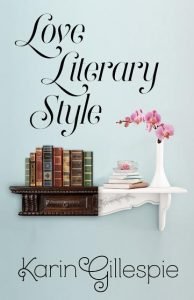 Love Literary Style by Karin Gillespie is a delightful romantic comedy that I thoroughly enjoyed. It’s a love story that at times had me laughing and at others had me wanting to strangle the main characters. I loved the characters though – all of them even the ones who were just side characters. Gillespie writes with such humor and warmth and it spills over into her characters and story. So very wonderful!

So what happens when a stuffy literary writer meets a writer of romance novels? Lots of sparks and more than a little conflict. Aaron is a literary writer and Laurie a romance novelist. They are both accepted to a writer’s colony and it is there they meet. The problem – because of an error Aaron is led to believe that Laurie is actually a literary genius and boy is he impressed and more than a little intimidated. Laurie on the other hand is basking in the fact that she was accepted to the colony. It gives validation to her writing career that is in sore need of some help. Of course the sparks fly between the two. When Aaron finally learns who Laurie really is its too late for him – he is already in love with her.

Aaron is struggling with getting his novel published. He’s an old school writer and the new world of publishing is a mystery to him. Facebook, Twitter, websites! He has absolutely no interest in any of it. He only wants to write. Laurie on the other hand is beautiful and bubbly and people are naturally drawn to her. When she’s at a conference for romance writers interest is shown in making a movie from one of her books. This sets Laurie’s career on the fast track and suddenly she’s the hugely successful author with her books everywhere. The one problem is that poor Aaron has no issue with being honest with people. He feels it’s his duty to tell Laurie that the publisher is just exploiting her. That her writing really doesn’t merit the attention her book is getting. Wow- not a good thing to do. Suddenly Aaron finds his butt out the door and Laurie moving on. Or is she? And left on his own will Aaron’s opinions of the romance world change?

This was just a great story. It left me feeling good and I like that although I do find myself missing Aaron and Laurie. They were quite amusing together and with Aaron’s ex Emma thrown in it was really hilarious. The novel good naturedly pokes fun at the publishing world and writers and I think it will appeal to anyone who wants to escape into the pages of a good book for a while. I can’t wait to indulge in more of Karin’s work. Highly recommended!