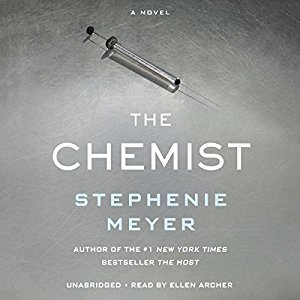 What a thrill ride The Chemist by Stephenie Meyer is! I really enjoyed The Twilight series by her and at first I was leery of reading this as I didn’t want more of the same. After reading the description though I gave it a go and I’m so glad I did. I was glued to this book from the first chapter to the last and listening to it on audio made it all the more exciting. It is narrated by Ellen Archer and she does a fabulous job of bringing this suspenseful story alive.

Juliana is an ex-agent who has been on the run from her former employers who want nothing more than to see her dead. Juliana worked for the government with a highly secretive agency and when she became what they thought a threat they sought to eliminate her. She’s become adept at staying alive and under cover. When her old boss contacts her telling her he needs her to do one more job and after this job the agency will never bother her again she realises that she has no choice other than to take it. In doing so though she meets someone who becomes important to her and in her line of work this is never a good thing. As the situation becomes more and more dangerous Juliana finds herself using her skills in ways she never imagined just to stay alive.

I really enjoyed this book especially in audio and seventeen hours just flew by. I liked Juliana as a character being that she’s a strong and capable woman. It was fast paced and exciting and well worth the hours spent on it. Recommended for fans of Stephenie Meyer and for those who enjoy a good thriller.