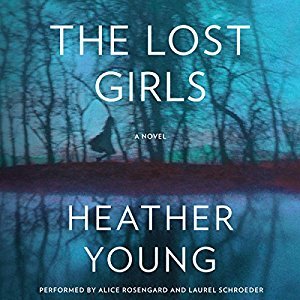 The Lost Girls is the debut novel from author Heather Young and a very good one. This is a story of long buried family secrets and one women’s wish to have the mystery of what happened the fateful day her little sister disappeared come to light.

In 1935 Emily vanishes from her family’s vacation home without a trace. The whole family is left in tatters. While Emily’s mother and two older sisters remain at the vacation home hoping for her return the father commits suicide.

Sixty years later one of the sisters who had been living alone at the lake house has passed away leaving not only the lake house but also a notebook chronicling what had happened that summer to her grandniece Justine. Being that Justine’s life is in a shambles she heads out to the lake house with her girls. There, through the journals, she learns about her family’s past but also begins to learn to take control of her own life as well.

I listened to the audiobook which is narrated by Alice Rosengard and Laurel Schroeder. I really enjoyed listening to both of them as they brought this story that spanned decades together.