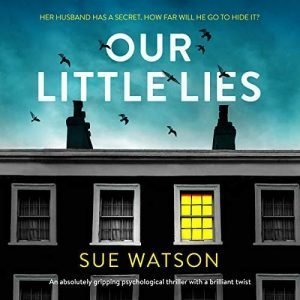 Another great psychological thriller! Marianne apparently has all anyone could want. Perfect husband, children, and home. We must remember that appearances can be deceiving though. Marianne’s husband is a cardiac surgeon and his only demand of her is that she be the ‘perfect wife’ and sadly nothing she does is ever good enough. To top it off Marianne has had her share of mental issues as well. So when the name Caroline falls off his tongue in a tone that Marianne doesn’t like at all she becomes obsessed with this woman she feels certain her husband is having an affair with. As I flew through the book I constantly wondered what was real and what wasn’t. Was Marianne in fact a nut job or did someone want her to think she was?

I really enjoyed the audio version of this book. It is narrated by Katie Villa. I’ve never listened to her before but she has a nice voice for audio so I wouldn’t hesitate to listen to another by her. This audio was a hard one to stop listening to and 10 hours literally flew by for me!

If you’re a fan of psychological thrillers give this one a go in audio or print. I really enjoyed it!