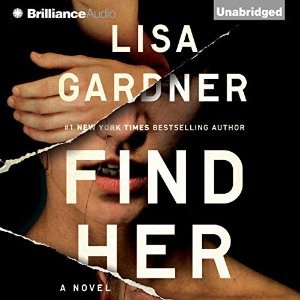 Find Me by Lisa Jackson had me in its grip from the first page to the last.  What a book – it’s creepy, suspenseful, and disturbing which are all qualities I enjoy in a book.  It had me on the edge of my seat for much of it.  I finished this book last week and still haven’t been able to get it out of my head.  I always find psychological thrillers freak me out some because things happen in them that could actually occur in life.  It’s like watching Criminal Minds or some such show.

Detective D.D. Warren arrives on the scene of a homicide different from most.  The apparent victim turned the tables on her abductor before he could hurt her.  This victim is Flora Dane and she is a survivor – a woman who can take care of herself.  As a college student Flora had been held prisoner for 472 days and she learned just how much a person can take or how far they can be pushed.  When she was rescued she vowed that nobody would ever hold that kind of power over her again and she learned everything there was to know about self defence and how to survive a situation such as she had been in.  There is only one thing – Flora Dane has decided to rid the world of as many of these psychopaths as she can even at great risk to herself.

The story itself goes in between the past and present.  Reading about Flora’s abduction and the life she had to endure was definitely hard to read and not so much because the novel itself is explicit but my mind has no problem imagining anything it needs to. I listened to the audiobook which is narrated by Kirsten Potter who I really enjoy listening to.  She did an awesome job of making this story even more alive and thrilling!

Highly recommended for those who love suspenseful psychological thrillers!

Source: Audiobook personal copy. Givaway sponsored by the publisher. No compensation was received. 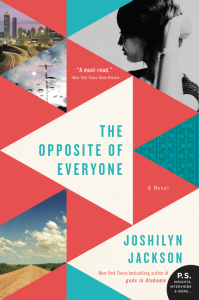 A reader always has those authors that they love because their books draw you in and don’t let go.  You love their characters and their stories.  Even more you love the way their books make you feel. Joshilyn Jackson is one of those authors for me.  The Opposite of Everyone has all of these qualities and more.  I devoured this book in a day and now find myself missing the characters and their lives.  The Opposite of Everyone is a moving story of life, love, and family.  Utterly fantastic!

Paula Vauss, our main character, is now a tough and successful divorce attorney but as a young girl she was named Kali Jai by her hippy mom and she led anything but a stable life.  Her mother had a tendency to move around when the situation warranted it whether Paula wanted to or not.  This made Paula angry and more than a little rebellious.  Feeling overwhelmed with what seems to be yet another move Paula does something that changes all of their lives forever.

Years and years go by without Paula and her mother having any contact other than the check Paula  sends her every month.  Paula feels that she ruined her mother’s life and that’s why there is no contact yet the checks are cashed every month until one isn’t and Paula learns that her mother is dying.  Paula is full of mixed emotions that only become even more complicated as several events occur that make her reevaluate everything she ever knew about her mother and herself.

In present Paula is a fiercely independent woman who plans on staying that way.  Yet she still feels so much for Birdwine who is her private investigator and past lover.  He agrees to help her and as they work together old feelings come to light once again.  As the story goes from Paula’s past to present we learn how Paula came to be who she is and how her free spirited young life made her the woman she became.

I listened to the audiobook of The Opposite of Everyone which is narrated by Joshilyn Jackson herself.  She is a fantastic as a narrator.  I love her voice in which you can just feel her personality pouring out. She really makes a story seem like you, as the reader, are living within it and I love that.

For lovers of women’s fiction The Opposite of Everyone comes highly recommended.  I loved it! 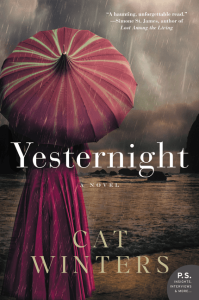 Having read The Uninvited by Cat Winters and loving it I was really excited to read Yesternight. What a fantastic story! Cat Winters has become one of my favorite authors and I eagerly wait for each new book she writes. I began Yesternight in the morning and finished it by the end of the day. I could not listen fast enough as the story unfolded and became more and more intriguing with each passing moment. This particular novel is historical fiction with a mystical element that is sure to please any reader.

The setting is Gordon Bay, Oregon and it’s 1925 and our main character Alice Lind is arriving there to administer IQ tests to the schoolchildren. Alice is an independent woman; a trained psychologist in a time when women didn’t generally hold positions like that. Of course as a psychologist Alice believes that any abnormalities of a person’s mind can be explained but in meeting one particular child in Gordon Bay she finds her views changing.

Alice meets seven-year-old Janie O’Daire and finds her an extraordinary child. Not only is she a mathematical genius but she also claims to have lived another life where her name was Violet, she was nineteen, and she drowned. Janie’s parents are terrified she’ll be found crazy and taken from them but Alice doesn’t believe the child is crazy and with more evidence Alice begins to believe in the unbelievable to a psychologist – that Janie is the reincarnation of Violet. As the mysteries of Janie unfold Alice begins to discover things about herself and her own past that change her life and her future.

Yesternight is one of those books I love. The ones I can’t put down and think about days later. As I said earlier I listened to the audiobook which is narrated by Xe Sands. I love listening to any book she narrates. She has a wonderful voice to listen to and always does a great job of bringing a story alive in my mind. I would recommend this novel to those who like historical fiction, mysteries, and really to anyone. It was that good. Highly recommended! 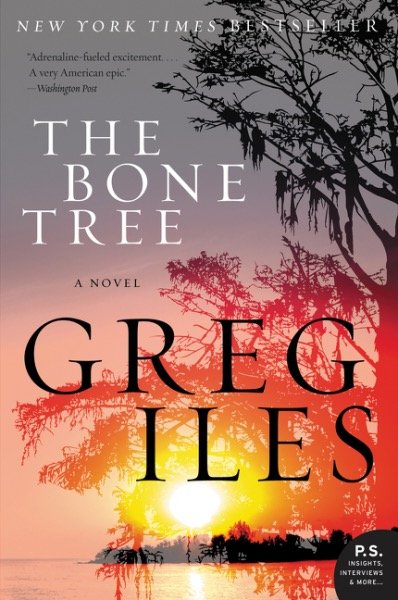 The Bone Tree by Greg Iles is the second book in the trilogy that started with Natchez Burning.  Both novels are phenomenal and once again I couldn’t listen fast enough to see what would happen next.

The Bone Tree continues right where Natchez Burning ended. Now I listened to them back to back so it was easy for me to pick up the story right away but even so the author recaps the first novel nicely and there is no problem picking up the storyline. However I would still recommend reading Natchez Burning first as you need the back story. There is no way to go on without minor spoilers so if you are going to read the series you may not want to go on.

The evil lurking in Natchez has been exposed. Penn, his father, his fiancé, and others have worked hard to make it so. In doing so they’ve caused even more chaos and danger. Many who have been exposed are people with a legal right to power and even more terrifying they use it to their benefit. There are so many secrets, lies, betrayals, and killings that this story keeps the reader turning the pages as fast as they can.

I can’t recommend this series enough. The plot and characters are simply amazing. Once again I listened to the audiobook which is narrated by Robert Petkoff and he does such a great job of bringing this story alive and at more than 32 hours that’s a good thing. Highly recommended!

Source: A copy was provided by the published in turn for an honest review. Audiobook personal copy. No compensation as received. 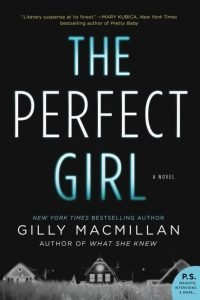 Zoe Maisey is a musical prodigy – a genius but she is also carrying with her a troubled past.  She caused the death of three teens due to being intoxicated.  She’s done her time and is free now.  She wants to begin living her life again and she starts with what should be the performance of her life.  However chaos erupts when an unexpected visitor shows up and by the end of the night Zoe’s life will never be the same as her mother is found dead.

I enjoyed this book although not quite as much as the author’s first book What She Knew. While this is a thriller I think I was expecting a bit more thrill.  I also found that it was hard to connect to the characters other than Zoe’s aunt.  Many of the characters are quite unlikable but that’s not an issue.  Quite often that’s what makes a book more exciting.  With the main character Zoe I sympathized with her in many ways but many of her actions left me questioning just who she was and what she was doing.

I listened to the audiobook of The Perfect Girl and it is really well done.  It’s narrated by Penelope Rawlins (who I have listened to and enjoyed before) and Dugald Bruce-Lockhart.  They do a great job of immersing the reader in the various aspects of this story.

Overall I really enjoyed this book.  Once I started listening to it I didn’t want to stop as I needed to know what was going to happen.  It does highlight how difficult it can be to start a new life and move on after a tragic incident.  Secrets and lies can lead to devastation and destroy the Second Chance Life that the characters so desire.  Recommended for those who enjoy psychological thrillers. 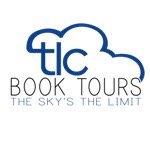 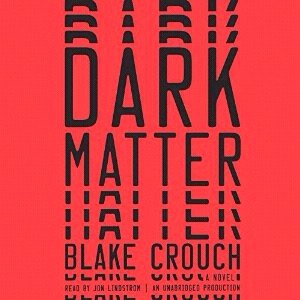 “Are you happy with your life?” Those are the last words Jason Desson hears before being abducted. When he wakes up in a strange place it’s to a man saying “Welcome back, my friend. “.

Jason has no idea what’s going on. In the world he finds himself in he is a celebrated genius. He has no wife and no son. In this world he’s created something most consider impossible, a multi-universe and he finds himself trapped within it. Will he ever be able to find his way back to the world that the family he loves inhabits?

This is a very different book with a unique storyline. I liked it but didn’t love it as many did. Truthfully I had been hoping it was more of a thriller than it was. Still it was good and kept me listening to see what was going to happen. It does make you think about your own life and how different it would be had you only made different choices along the way.

I listened to the audiobook which is narrated by Jon Lindstrom. I haven’t listened to him before but he has one of those voices that is very easy to listen to and I’d certainly listen to him again.

Recommended for those who enjoy science fiction/thrillers.

Source: Copy received from the publisher for an honest review. No compensation was received.