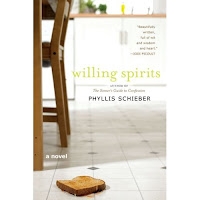 Willing Spirits by Phyllis Schieber is a book I received for her Blog Tour through Promo 101 Virtual Blog Tours and I really enjoyed what this novel portrayed and that is the enduring strength of the friendships between women. There was also another aspect of the novel that really intrigued me and that was the relationship between a parent and a child. I would describe this as an intimate novel—intimacies with lovers, friends, family—the very deepest of feelings and emotions.

The novel starts out with a bang when Jane arrives home to find her husband doing the nasty with a twenty-something girl. I think Jane realized long before this happened that her marriage was over, yet she had never seemed to have enough courage to walk away before this. This betrayal is the last straw and she tells him to leave. Her first instinct is to turn to her best friend Gwen.

Gwen and Jane have been friends for nineteen years. They have a wonderful friendship, one I must say I was very envious of, being that I don’t really have anything like that in my life-acquaintances and real friends are two different things. I loved the easiness they had with each other; the ability to say what they thought and knew that it wouldn’t be a big deal. They may disagree but it did nothing to hurt their friendship and nobody ever walked away with hard feelings. Friendships such as those are hard to find. If you have one, hang onto it. When one or the other of them had something happen or just needed a shoulder, the other one would drop everything to rush over and be there for them. They were there for each other through thick and thin. I really think this is why I love novels that focus on women’s friendships such a s Willing Spirits does. While they make me yearn for such a relationship, I still savour them page by page. A beautiful quote…

Phyllis Schieber portrays her characters in such a way that they seem so real to you, like someone you might actually know. They are real women with real issues that don’t always have an easy answer—they experience heartbreak, fear, disappointment, anger, happiness. Things have not come easily to either Jane or Gwen. Gwen’s first husband had left her early on with two young boys to raise on her own and well Jane didn’t really ever have a good marriage. Her husband Arnold was not very often good to Jane. I myself wanted to slap him upside the head more than a few times. Now Jane is trying to figure out how to move forward as a single woman in her forties while Gwen struggles in her ongoing relationship with a married man. Both women are supportive of each other whether or not they agree with the actions of the other.

Another aspect that resounded with me was the mother-daughter one. Both women really had somewhat struggling relationships with their own mothers. While Gwen’s was just really not there as a mother; Jane’s was, but not quite in the way she wanted. It’s a feeling I relate with. While you really love your mother and feel very grateful to have them, something is missing and it’s a lonely feeling. Here’s a quote I found particularly revealing of their relationship which was just after Jane’s mother had passed away and Gwen is with Jane…these are the times when close female friendships are so important—when other things are lacking in your life and you need that emotional support from a friend…

I really enjoyed this novel. I urge anybody who loves reading of strong female relationships to give it a read. It really portrays a woman’s willingness to give all of herself to a close female friendship; hence the title Willing Spirits. The writing in this novel had me captivated, so much so that I’ve already purchased her first novel Sinner’s Guide to Confession to read. You can purchase Willing Spirtis in the US here and in Canada here.

Many thanks to MaAnna at Promo 101 Virtual Blog Tours for inviting me to participate in this tour.