I read this book for my library bookclub pick. Half of us liked it and the rest of us thought it was good but not great. I think it could have been really good but for a few things that bothered me.

The premise of the story I really liked. Karen comes home after her mom passes away to care for her disabled older sister Kelli. Karen, having had issues with how her mother gave up her life to care for her sister, hadn’t been home in a decade. She feels guilt at how her relationship went with her mother and overwhelmed with how to proceed with what’s best for Kelli. Had the story elaborated further with this storyline this reader would have enjoyed it much more. Instead we are introduced to Trevor.

Trevor was one of the caregivers to Kelli and she really seemed to like him from what Karen could see. However it isn’t long before Karen notices that Trevor is really insinuating himself into every aspect of their lives to the point of being controlling and his behaviour just escalated. This is where the story lost me. Karen had been married previously to a bully and she just lets this man she doesn’t know put her in the same situation as she had in her marriage. It didn’t make sense to me. Also the ending was a toss up for me. Part of it was good and the other part made no sense, at least to me and my bookclub readers.

It was an ok read for me. I did want to get through to the end to see what would ultimately happen to Karen and especially Kelli. I really wish the book had focused more on that relationship and the hardships and joys that come from caring for someone like Kelli. The author has a lot of great reviews on Goodreads and I would be willing to try another of her novels at some point.

Cora is a slave on a cotton plantation in Georgia. Life is hell for all the slaves, but especially bad for Cora; an outcast even among her fellow Africans, she is coming into womanhood—where even greater pain awaits. When Caesar, a recent arrival from Virginia, tells her about the Underground Railroad, they decide to take a terrifying risk

and escape. Matters do not go as planned—Cora kills a young white boy who tries to capture her. Though they manage to find a station and head north, they are being hunted.

In Whitehead’s ingenious conception, the Underground Railroad is no mere metaphor—engineers and conductors operate a secret network of tracks and tunnels beneath the Southern soil. Cora and Caesar’s first stop is South Carolina, in a city that initially seems like a haven. But the city’s placid surface masks an insidious scheme designed for its black denizens. And even worse: Ridgeway, the relentless slave catcher, is close on their heels. Forced to flee again, Cora embarks on a harrowing flight, state by state, seeking true freedom.

Like the protagonist of Gulliver’s Travels, Cora encounters different worlds at each stage of her journey—hers is an odyssey through time as well as space. As Whitehead brilliantly re-creates the unique terrors for black people in the pre–Civil War era, his narrative seamlessly weaves the saga of America from the brutal importation of Africans to the unfulfilled promises of the present day. The Underground Railroad is at once a kinetic adventure tale of one woman’s ferocious will to escape the horrors of bondage and a shattering, powerful meditation on the history we all share.

I am likely in the minority for this one. It was ok for me but not great as it was for others. I think the subject matter extremely important but I found I never really connected with the characters in a way that would have had me more invested in the book. I felt for the people and was horrified at what they went through and I was definitely interested enough to finish the novel. I had listened to the audio which is narrated by Bahni Turpin. I’ve listened to her before and I like her voice and she did a great job of telling this story.

I always enjoy historical fiction and would really like to get back to reading more of it. Sisters of the Resistance is set in the Paris Resistance movement of WWII. There are alternating timelines between 1944 and 1947. I admit to finding this confusing at times but I still enjoyed the story.

Gabby and Yvette are sisters who are as different as night and day. Gabby is the concierge of an apartment building while Yvette, looking for more, is recruited by Catherine Dior into the Resistance. Despite Gabby always trying to avoid trouble it isn’t long before she is working for the Resistance as well. The two find themselves in increasingly dangerous times.

For me the novel would have worked better if it had gone from 1944 to 1947 in order without switching back and forth. That being said it was interesting look into WWII and to see strong and capable women contributing in valuable ways to the war effort. The one thing that disappointed me was I would have liked if the story had delved deeper into the life of Catherine Dior.

All in all an enjoyable book. This eleven hour audio is very well done and narrated by Saskia Maarleveld who I always enjoy listening to.

The Book of Accidents was fantastic and right up my alley being such a fan of anything horror! This book reminded me of old school horror reminiscent of King and Koontz. It was dark, creepy, and utterly gave me chills throughout!

Nathan returns with his wife and son to their old hometown after his abusive father passes away and leaves his childhood home to him. Right from the beginning weird things start to happen. Nate is beside himself when he sees his dead father and for an extra dose of freaky his wife Maddie, who is an artist, sees her sculptures come alive. There was some buggy eyes going on at that. My favorite character though was their son Oliver. He is one that can feel the pain of those around him and what a nightmare that can be. Really the whole family carries dark secrets within themselves that left them wide open to the sinister forces around them. Believe me it’s one wild ride through different timelines, dimensions, and so much more!

The audio is great! It is narrated by Xe Sands and George Newbern, both of whom I’ve listened to before. I have to say though that Xe Sands is a personal favorite of mine and I love when I find books that she is narrating. They both did an excellent job of portraying the eeriness and horror of this novel. The audio is almost seventeen hours and I enjoyed every second of it!

If you’re a fan of horror, sci-if, or suspense, The Book of Accidents is one that’ll keep you up at night!

Review copy provided by the publisher. All opinions are my own.

I’m a huge fan of Robyn Harding, having read all of her books. She has a way of drawing me fully into the story she’s telling and The Perfect Family was no different. Once I started it I could not stop listening to see just what might happen next.

The Adler’s look like the perfect family from the outside. Yet we all know that is rarely true in most families. Still they have the kind of life most of us strive for – the beautiful home, kids, and success. One morning though the Adler’s world turns upside down when they find the front of their home has been pelted with eggs. At first they figure it’s just a prank but it only escalates. Needless to say they become very frightened. Why is this happening to them? Is it because of some dark secret that one or more of them is keeping?

I listened to the audio and it is fantastic! It comes in at close to eight and a half hours and they fly by. The best part is the narration though! The story is brought to us by Cassandra Campbell (my all-time favorite), Ali Andre Ali, Michael Crouch, Amanda Dolan, and Pete Simonelli. They are all amazing and bring this book alive in the best possible way! So enjoyable to listen to!

If you love psychological thrillers as much as I do then The Perfect Family is one for your list. Really anything by Robyn Harding should be on your list!

Review copy provided by the publisher. All opinions are my own. 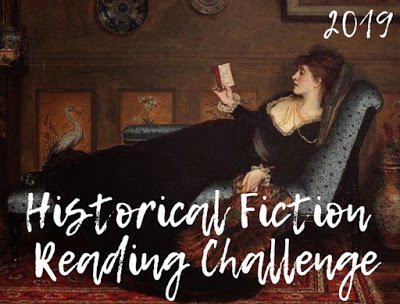 I am joining only one challenge for next year and that will be Amy’s 2019 Historical Fiction Challenge over at Passages to the Past. For a long time I read a lot of historical fiction and then I kind of stopped. I don’t know why though because I truly love it so I’m going to use this challenge as a way to get back into it again.

There are a few levels and I’ve hemmed and hawed on which I’d choose and finally settled on the Medieval level which is 15 books. I should easily be able to do that and maybe even more.

I am really looking foward to doing this challenge. If you’d like to join in head over to Passages to the Past and join in the fun!